When I wrote my original post on the folly of chasing gear for competition I did so at a point where I had been competing for a little over a year and had less than ten matches under my belt.  For a reference I write this post having concealed carry for almost 12 years and in that time I have changed guns and platforms an order of magnitude more than I did with competition gear.  With Part 1 I will look into some guns I tried and what I learned.

If you are new to concealed carry this as an example of what not to do; If you are a CCW veteran this might seem familiar or even laughable to you.  Either way I present to you a method not worth repeating.

The first gun CCW gun I bought was going to be my last – or so I thought when I paid for it – a Rock Island 1911 Officer’s model.  Presently Rock Island (Armscor) has built a reputation for decent 1911’s; mine was not made in the era of praise.  It had so much going wrong for it I can’t list it all; a sample includes: GI sights, no beaver tail, a gritty 7+ lbs trigger, sticky mag release (it would stick in!) and the worst Parkerized finish imaginable.  It would feed 230 grain ball ammo, sometimes and it would feed JHP’s exactly never.  I did a little work on it, got it to function semi-reliably and actually used it in the shooting portion of my licensing. It was accurate: when it fed.  For the record, the magazine brand or type didn’t matter, this sucker was the king of feedway stoppages!  I quickly quit trying to make it a reliable gun and relegated it to range toy, but it sucked at that as well.  I sold it, with full disclosure of the problems to a guy who wanted it for a truck gun on his ranch.  As far as I know he hasn’t shot it even once.

That was followed by a string of mediocre garbage by Bersa, Taurus, Rossi and Kel Tec.

Lesson #1: Don’t believe what you read and damn sure don’t listen to the guy behind the counter.  Find a reputable trainer/friend/co-worker and get several opinions and never, ever, ever, never, ever buy a cheap 1911 and plan on it saving your life.

In my string of crap I did manage to hit a home run, at least with reliability, build quality and accuracy.  I bought a slightly used S&W Model 642-1.  I slapped some Crimson Trace grips on it and carried it often.  8 years later I still have it.  It has ridden IWB, OWB, in my pocket, on my ankle, in my console, and in a backpack. It goes bang every time and after putting untold rounds down range I can actually make decent hits with it. It is not extremely fun to shoot, but it works. I WOULD NEVER RECOMMEND ONE FOR A FEMALE BEGINNER! For that matter, I wouldn’t recommend any J-Frame to a female beginner. If I am really dressed up, ala’ funeral or wedding (one and the same?) then you’ll find that old 642 in my pocket. Otherwise it spends it days in peaceful solitude, secure in the fact I can never be sold because of the discoloration caused years of sweat and grime. 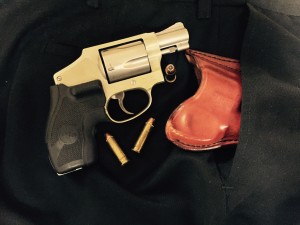 Lesson #2: The Airweight J-Frame’s are fine firearms, IF and only IF you are willing to learn it. It is not a gun for people who are recoil sensitive and it is not range toy.  It is ultra reliable, easy to carry and will always be there for you.

An old FI Industries D380 1911 look-alike, a Kel-Tec P3AT, the Bersa Thunder CC and most recently a Ruger LCP. After shooting way too many rounds of over-priced 380 ACP I can safely say I am done with that cartridge. Fixed barrel blowback operated 380’s have more muzzle flip than an equivalent size 9mm with a normal recoil operated action. The smaller guns hold fewer rounds and with a shorter barrel you generally get weaker performance compared to the S&W 642. Before some smart ass says it, no I don’t want to be shot with either one. The small LCP/P3AT carried great in my pocket, but so does my 642 and it is not as susceptible to lint and if I am shooting from an odd grip or odd position I won’t be the recipient of a  stove-pipe.  For me, the small 380’s and 5 shot revolvers fill the same role.  Choose wisely.

Lesson #3: Carry the most powerful handgun you can conceal, all else being equal. Any handgun cartridge is a poor man stopper, don’t make the situation worse by compromising.

With that I will wrap up Part 1.  If this offended you just wait for Part 2!  The mathematical constant in all of these lessons is wasted time and wasted money that could have been spent on training and ammo.

Do you feel I am grossly wrong?  Have you made similar mistakes?  Tell me below.