Lately the US military’s push for a “Modern Handgun System” (aka MHS) has come under some fire from Capitol Hill for absurd levels of expense. It’s worth noting that MHS has been floating around in some form or another for about a decade now, and as yet without result. Although it looks like this time they are actually going to solicit samples and a number of manufacturers have already introduced potential candidates for the contract. You can expect at least one more potential candidate to debut at SHOT.

This latest article happened to hit the news about the same time that the Navy Special Warfare Group’s decision to adopt the Glock 19 hit the web. Most of the units in JSOC have actually been using Glock sidearms for quite some time, and even MARSOC has brought the Glock 19 on board as an alternative to the customized Colt 1911 pistols that they bought in 2012. 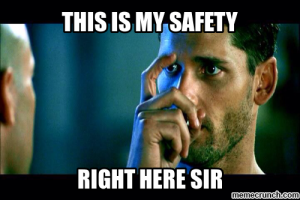 This has led many people to ask why the military as a whole doesn’t just adopt the Glock 19 and be done with it. It’s a reasonable question and there is certainly a sizable amount of DOD bureaucratic nonsense involved…but there are a couple of really good reasons, too.

Yesterday CNN ran a piece on a report about the Los Angeles County Sheriff’s Department’s upsurge in unintentional discharges with their recently adopted Smith & Wesson M&P pistols. The LASD issued the Beretta 92FS for many years prior, as had several other major LE agencies in California. The Beretta 92FS is, as you probably know, a traditional double-action semi-automatic pistol. This means it has a long double action trigger pull for the first shot, and the action of the slide cocks the hammer for subsequent shots giving a single-action trigger pull from that point on. The Beretta 92FS also has a combination decocker and manual safety that, when activated, completely disengages the firing mechanism from the trigger.

The simple truth of the matter is that every handgun on the market has a certain margin of error that results from its design.

In other words, certain designs are more forgiving of handling mistakes than others. The Beretta 92 with its long double-action trigger pull, manual safety, and method of disassembly has a relatively wide margin of error. The Glock 17 with its relatively light, relatively short trigger and a requirement to actually pull the trigger to field strip has a much narrower margin for error.

Let me make this concrete. Removing the slide from the Beretta 92:

As you can see, removing the slide on a Beretta requires pressing the button on the right side of the gun, and rotating the lever on the left side of the gun, at which point the slide assembly moves right off the gun. If someone ignores the manual’s prescribed procedure and neglects to properly clear the weapon before attempting to field strip it, an accident is extremely unlikely because they don’t need to pull the trigger. It’s possible to remove the slide assembly from a Beretta 92 style pistol with a round in the chamber and I’ve seen people do precisely that when they forgot to properly clear the chamber of the pistol on multiple occasions. The indication of a failure to properly clear the chamber on the 92 comes when you remove the barrel from the slide and find that there’s a round sitting in the chamber. Oops.

If, however, someone ignores the Glock manual’s prescribed procedure and neglects to properly clear the weapon before attempting to field strip it, the indication of a failure is going to be a gunshot because you have to pull the trigger to field strip that weapon. That’s a much bigger and much more consequential oops. If the exact same person makes the same handling mistakes with both weapons, it’s only with the Glock that a bullet gets launched.

The same disparity is present when we discuss other handling situations with both weapons. The Beretta’s longer, heavier trigger pull gives a larger margin for error if someone is not following proper safety procedures and has their finger on the trigger at inappropriate moments. It’s certainly not impossible to fire a Beretta 92 on startle response alone, but the Beretta’s trigger gives more of an opportunity to realize that you are doing something wrong than a Glock’s trigger does…and when people are handling weapons under unfamiliar levels of stress that margin of error can mean the difference between a close call and a gunshot wound.

The military units carrying Glocks currently are generally elite forces. They have extremely demanding standards of admittance, and an exceptionally high level of accountability for their personnel. They also conduct far more training with their sidearms than other groups in the military. This combination of factors means that the Glocks are currently being issued to individuals who:

In other words, if I was going to issue a weapon with a low margin for error, it would be to those guys because they train often and they do not screw around when it comes to safe handling of firearms. Ideally that description would apply to everyone who is issued a lethal weapon as a part of their job, but unfortunately it’s just not the case.

The general public believes that police and military personnel are trained experts with small arms but in reality a lot of what passes for training for police and military personnel in the United States is really not very good. (It’s often even worse in other countries) The accountability for behavior with lethal weapons is also nowhere near what it needs to be. I know of multiple instances of police officers who unintentionally discharged their sidearm when engaging in unsafe handling practices and receiving absolutely no sanction for doing so because, and I quote, “Well, nobody was hurt!” To my thinking, it would be much better to enforce proper handling practices before somebody catches a bullet…but that’s just me.

It’s worth noting, here, that your average police officer receives more training with a handgun than your average member of the military. The military as a whole does not take handgun training seriously nor do they have top notch accountability for handling mistakes across the board. If the military started issuing Glocks in these circumstances it would lead to a spike in accidents, only on a much larger scale than what the LASD experienced.

The antidote for this, of course, is training and accountability. (This isn’t the first time I’ve mentioned that, by the way) The LASD attacked their problem by conducting more training with their officers and the fact that they kept careful track of what was happening shows that there’s serious interest in accountability within the department. Kudos for that…but the training and accountability are expensive and resource intensive both in terms of time, man hours, and institutional will. For an institution like the LASD, the handgun is an extremely important piece of equipment. For many in the military, though, it just isn’t…and the resources needed for quality training on the handgun is seen as resources better used for training on other weapon systems and tasks that have a much higher strategic level of importance.

It’s worth noting, though, that in the modern world of green on blue incidents and attacks on military personnel at various military installations it might be time to seriously reconsider estimations of the pistol’s strategic importance.

A new (or perhaps slightly updated) sidearm that is designed around the inevitable human factor and that comes as a part of a program ensuring that everyone in the military who has access to a handgun is able to use that handgun safely and effectively to defend themselves and their colleagues, on the other hand, sounds like a splendid idea.