So PDB sent me this early in the morning, and it almost made me hit the tequila at 0800. I love Armlist fails, but this one? This may be the new world record. Let’s begin with the first photo, shall we? 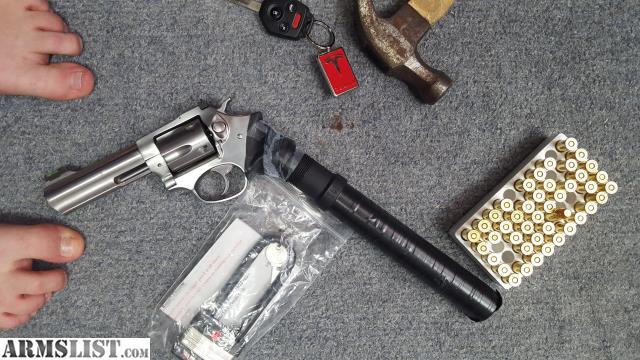 I’m honestly sure whether this is a photo of a gun for sale, or a modern art piece. In fact, I don’t even know where to start with this one. I mean sure, there’s a partially consumed box of ammo, a set of car keys, and it’s nice to see that someone is taking my advice about carrying a hammer for self-defense seriously, I really have two questions about this photo. First, why does the guy appear to only have 4 toes, and second what in the actual f*** is going on with the grip of that poor SP101?

Luckily, the ad’s description likely has the answer to both of those questions.

Im sort of a big guy so I increased the grip length to fit in better with my sword collection. Honestly I dont even like guns im more of a sword guy so id really just like to get this off my hands so I can by a nice wastahsi made cold steel. My other cold steel like my chinese great war sword is pretty great, i mean i could easily draw it faster than this ruger.

Comes with a fresh box of shells

Anyway, hit me with your best offer and let me know if you want to meet at City Loan pawn as they have an FFL.

I know what I have! no low ballers. I dont want your glock or some cheap oversees made 1911

I…I…look I don’t even know how to mock this. In fact, I can’t even tell if this sale is for real. It’s either 100% completely sincere, or such a hardcore troll job that it’s completely indistinguishable from a truly awful yet sincere sale. But for the sake of comedy, let’s assume that it’s sincere. Even though I actually hope it’s a troll job.

Im sort of a big guy so I increased the grip length to fit in better with my sword collection
This is code for “I’m morbidly obese and I’m not 21 yet, so I bought this gun through a private sale.” You know how I know that? No one over the age of 21 has anything that they’d refer to as a “sword collection.” I know people who are older than 21 and own enough swords to be referred to as a collection, but because they’re adults they’d never say something like “let me show my sword collection” while pushing their taped up glasses up their nose and simultaneously popping a massive pimple.

Honestly I dont even like guns im more of a sword guy so id really just like to get this off my hands so I can by a nice wastahsi made cold steel.
Okay, I gave the guy the benefit of the doubt here and spent a solid 5 mikes googling “wastahsi” to see if that was some kind of exotic Oriental sword that I’d never heard of. It’s not, so I assume that this guy really struggles with spelling (and likely pronouncing) the word “wakazashi”, which is the name of a specific type of Japanese short sword. Yes, Cold Steel does make one, and I bet there’s a hilariously awesome video of some dude using it to chop up a ham-hock.

My other cold steel like my chinese great war sword is pretty great, i mean i could easily draw it faster than this ruger.
…sigh. All I can’t think of now when I read stuff like this is the “21 foot rule” scene in Justified.

I know what I have! no low ballers. I dont want your glock or some cheap oversees made 1911
Any points I would have awarded for not wanting a cheap oversees (sic) 1911 are immediately revoked for 1) misspelling “overseas”, 2) and not wanting a Glock. Look bro, I’ll tell you exactly what you have. You have one of the best small frame revolvers ever made, and you have completely dicked it up because “you’re more of a sword guy.” I bet when my friends at Ruger see this post, they’re going to look at that dildo you taped on to their gun and think “SHIT, why didn’t we think of that? We’ve been missing out on an entire segment of the market!” Oh wait, no that’s the complete opposite of what they’ll think. They might have to take the rest of the day and start drinking at noon, because of the pure awfulness that you’ve inflicted on their fine gun.

The only good thing I can take away from this post is that it doesn’t look like the grip-dildo has permanently damaged the gun in any way, so if someone were to buy this they should be able to unfuck it pretty quickly by taking off the gripdo, burning it and salting the earth it was burned on, and then adding a sweet pair of Crimson Trace Lasergrip for Ruger Sp-101.

This might be the worst thing I’ve ever seen on Armslist. The spelling, the grammar, the gripdo, the missing toes? I can’t even. I need a drink. I’d like to apologize to my friends at Ruger for showing this abomination. No one should ever do this to one of your guns.