Yesterday, we talked briefly about how Smith & Wesson will always have the infernal lock as part of their revolver line. However, there are ways that they could be rid of the lock. The following is pure speculation on my part, but if I was the CEO of Smith & Wesson, here’s how I’d get rid of the IL without ending up on CNN. 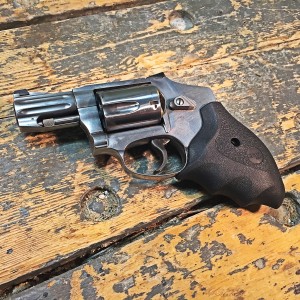 First, we have to remember that S&W is currently making some guns with no lock. The best example, and the only one I happen to have handy is the 640 Pro Series. They also did a run of the Model 42 in their classics line which lacked the IL. To my knowledge they haven’t made any medium or large frame guns recently without the lock. When you look at S&W’s lineup there is a perfect place to start the war on the lock, and that’s the Performance Center (and Pro Series) line of guns. The Pro Series/PC guns are marketed as “for shooters” and bring a higher price point than the standard revolvers in their lineup. That makes them the perfect place to start removing the IL. Offer all of the Pro Series and PC guns in “no-lock” configurations for a slightly additional premium. In year 1 of our three year plan, the no-lock Pro/PC guns would represent a small chunk of the lineup, with an appropriate price increase.

The reason they’d have to be more expensive than the lock-equipped PC guns is because the CNC machine doesn’t know if it’s making an N-frame for a vanilla 629 with a lock or a 929 no-lock gun, it’s just following a program. So you’d have to run a special program for the no-lock guns, and that costs money and time. That’s why the no-lock PC/Pro guns would carry a small price increase relative to the other guns in their class.

It’s a solid assumption that those guns would sell out. That gives S&W the financial justification to expand the “no-lock” modification to the entire Pro Series and PC lineup, because the no-lock guns sold so well in year 1. Now in year 2, all guns in that class are sold without a lock, leaving only the “standard” revolvers and the classic line equipped with the IL. Year 2 is the most dangerous part of the operation, because the no-lock guns have to sell well enough that they cut into the sales figures for the lock equipped guns. That in itself is a risk, because if the no-lock guns undermine S&W’s core lineup, there’s a 50/50 chance that they just get killed off. So in year 2, we need two things to happen: the no-lock guns to sell great, and the appropriate corporate people to look at the sales numbers and go “huh, people really like no-lock wheelguns. Let’s sell more of these.”

Which brings us to year 3, when S&W announces their new “Collector’s Series,” a spin off of the Classic series. Here at the end-game, the classic series is essentially discontinued in all but name only, and replaced with the Collector’s Series, which are all no-lock versions of S&W’s historical greats, the Model 10, the 29, etc. After three years, the IL continues to exist in S&W’s “main” production revolvers, however all guns branded under Performance Center, Pro Series, or Collector’s Series are now sold without IL, with these guns making up the bulk of S&W’s revolver sales now. As time goes by, the lock would simply be quietly phased out of all production, citing reasons like “cost savings” – since the no-lock guns were outselling the lock equipped guns.

Sadly, this is all speculative on my part. Would it work? Probably. There are some rough spots in the plan that would need to be worked out, and I know that it likely won’t happen, but it’s healthy for me to exercise my mind. Until then, I’ll keep buying revolvers with the lock, because it’s really not that big a deal. But man…it sure would be nice to be able to buy a factory new, no-lock Model 25 in .45 Colt.