Mike Seeklander, who is both a serious competition shooter and a top notch defensive trainer has an excellent article up about the differences and similarities between training to fight vs training to compete. Most interesting for our purposes is the link between gun manipulations and success in a self-defense incident. From the article: 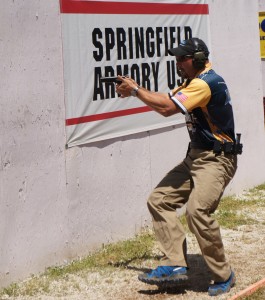 Marksmanship and Manipulation Skills – Similar
This is one area where the training is relatively similar. When training for a shooting match, the goal should be to increase the speed and accuracy that a given target can be hit in a variety of circumstances. Those skills are directly usable in a gunfight as long as you do your research and have an understanding of the potential side effects you may experience that will change the way those skills are applied. An example might be the visual distortion you might experience that would prevent you from focusing clearly on the front sight of a handgun in a fight due to stress and adrenaline (although I have spoken to several gunfighters that have stated they relied on a clear front sight focus to hit their attacker). Generally speaking though, increased marksmanship and manipulation skill can be obtained through similar training.

I strongly encourage everyone to read the rest of the article, as it’s a great look at the important differences between fighting and competing. It’s interesting that what we focus on here, the fundamental skills, apply across the board. A punch is a punch, a kick is a kick, and getting fast, accurate hits on target is important whether you’re competing or fighting for your life.