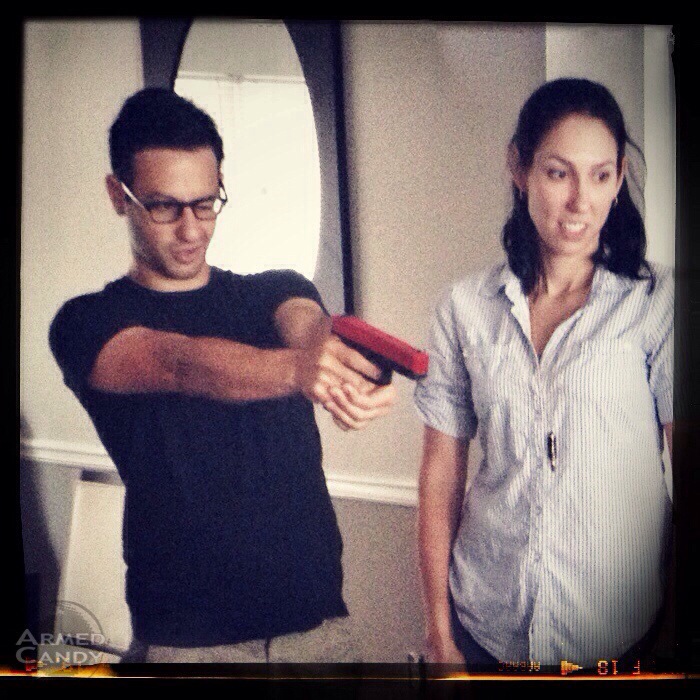 When was the last time you saw a firearms error in a movie? Some of us are better able to overlook these gross over estimations of firepower than others; I’ll admit, I’m not such a person. We’ve all seen those sequences when a single shot from a cop’s side arm, knocks a bad guy off his feet and over a car. What about those scenes when an automatic weapon has no muzzle rise and bullets hit all the intended targets? We know it’s complete fiction, but does the average joe?

This weekend I was invited to watch the filming of a pilot episode of a Comedy Central/Sony collaborative sitcom, called “Duty”. It’s about two Chicago cops, one of whom is played by my step-brother. While I was there, the scene they were filming called for my bro to accidentally fire his pistol while he and his partner are inside their closed vehicle. As the show is a comedy, I gathered that the writers were making a joke about a bumbling cop who might fire his weapon unintentionally. However, as I thought about the concept later, I realized that I should probably have an issue with this idea.

Behind the Scenes Note: The script did not acknowledge the temporary hearing loss the two might have experience after the gun was fired. The actors tried the scene in this fashion once, but didn’t feel it “worked” and returned to the original plan.

More often than I would like, I hear about an “accidental discharge” of a gun. I know it’s very rare, but when they happen, it’s makes news. Unfortunately, the average, uneducated about guns, Joe off the street, doesn’t realize that this kind of firearms injury is highly unlikely. He also doesn’t realize how easy it is to keep such an “accident” from occurring. Yet this situation has made it into a sitcom script and I was sitting and watching it unfold. I told the writers of the show that I was available to consult and took my family to the range. What else could I do?

So now I must ask you: as a Gun nut, do you find gun humor like this funny? Do you think it perpetuates a fear of fire arms by the general public? What about a fear of cops? Am I over-reacting? Should I just go quietly back to my blogging chair, and be nothing but happy for my bro on his “big break”?