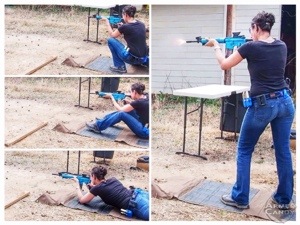 While practicing and learning 3 gun stuff with Janna Reeves and James Casanova (two members of the Noveske Shooting Team) I learned a little bit about how to train. Since running through stages isn’t always feasible and isn’t necessarily the most effective way, we began with some small drills. The first was designed to speed up target acquisition and the second pushed accuracy as well as physical stamina.

To set up the first drill, called a “Par Drill,” one needs a shot timer with the ability to sound a second buzzer once a pre-set amount of time has elapsed. The shooter stands at low ready. This drill can be done with any type of gun but the target should be adjusted for whatever firearm is being used. We practiced with our rifles and a gong target set up at about 50 feet. The buzzer sounds and the shooter should get thier sights on target and then take the shot. This is done five times and then an average is calculated.

So here’s how it went for me: I shot at the target five times and the average time that it took me to get on target and pull the trigger was about two and a half seconds. I may have missed one or two, but that was not important for this drill. Once we had that 2.5 seconds number, we programmed it into the shot timer and started again. I held my gun at low ready and when I heard the buzzer I would get my sights on and take a shot. However, when 2.5 seconds had elapsed another buzzer would sounds gently letting me know that I needed to speed things up. James explained that doing this drill over time, would force my target acquisition time to improve little by little. This drill can also be used in dry fire practice.

The next activity was the “Bounce Drill”. We began with our rifles, standing at low ready. When the buzzer sounded, we would shoot at the target. Once we had a hit we would change to a kneeling position. Then we had to drop to a seated position. Next, we would spin our legs around to a prone position. At this point we would reverse the order of positions and get back up. The getting back up was much harder than the dropping down. This drill was great gaining a sight picture while pushing one’s body.