I received my official squadding for Bianchi Cup over the weekend, and in the letter I received notice from the NRA that I’d made Master class in NRA Action Pistol. 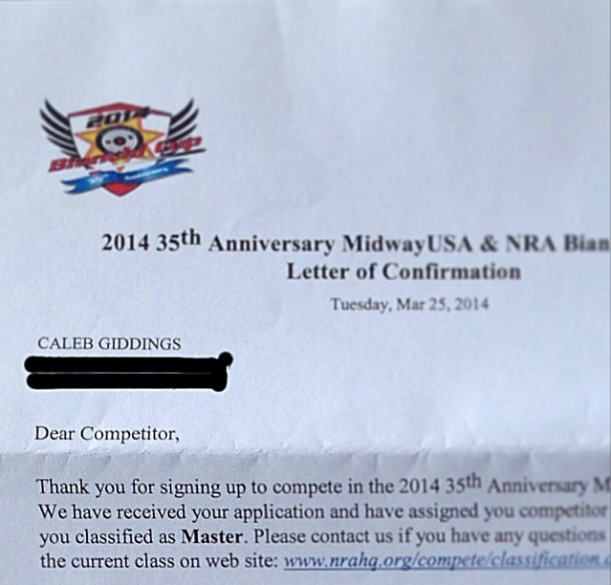 You classification in NRA AP is based off six shot averages of your scores, so for Master your six shot average must be at least 57.60. Now having made Master in NRA AP (when they re-ran classifications in advance of the 2014 events), I am now faced with an interesting choice. I have Master class in IDPA, obviously, and now Master in NRA AP. There are only two “action” pistol sports that have their own classification systems that I’m not Master or better in, and those are USPSA and Steel Challenge. Dismissing Steel Challenge for a moment, a quick check of my USPSA classification record indicates that when I was shooting USPSA every weekend I was 3 points and change away from making Master in L10.

This morning, I find myself debating an interesting topic. Is it worth the time and effort necessary for me to go out and finish off those last few percentage points and make Master in USPSA? The obvious pros are that training for USPSA would make me better at IDPA. No question in my mind about that. Additional pro, it would be cool to be Master in the “big three” pistol sports, just to say that I am. The cons are that shooting USPSA doesn’t particularly blow my skirt up these days.

But let’s say I do it. That leaves me with another choice, and that choice is important. What division should I chase USPSA Master in? We can all agree on two things: L10 is silly, and no one cares about revolver unless your name is Jerry Miculek. I love wheelguns, but mastering the wheel doesn’t really matter to anyone outside of a very small audience. So that leaves Open, Limited, Single Stack, and Production. Because my focus is on the actual practical application of the pistol, we can rule out Open right away, unless I wanted to chase Master with an RMR equipped Glock. That sounds like about as much fun as getting punched in the sack, so pass.

Now we’re down to Limited, Single Stack, and Production. I will rule Single Stack for one reason: I just spent a year shooting 10,000 rounds through a 1911. It was fun and everything, but I don’t really want to spend that much time working on my guns this year. So then we’re left with Limited and Production. Remember, the goal here is “practical” application of the pistol.

So it’s kind of a toss-up. Although the deciding factor would be the cross platform usefulness, because I really don’t want to have to mess around with different guns for different games.

So, what do you think? Should I go for Production Master in USPSA?