10 years ago, Bianchi Cup was in danger. The match had fallen from its former glory as one of the crown jewels of the shooting sports into a specialist’s match with limited participation. Now, fast forward to 2014, and the Cup is bigger and better than ever. It has resumed its place at the top of the heap of the pistol sports, with a massive prize table, cash prizes, and the sort of pageantry you would expect from a national championship. What changed? 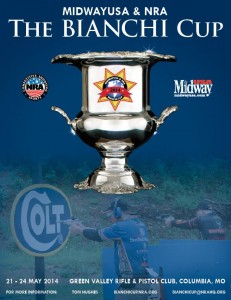 It’s hard to say exactly what changed, but the most obvious contributing factor to the revitalization of the Cup is good leadership. The man behind the curtain is Tom Hughes, and he and his team have poured more blood, sweat, and tears into making the Cup into the pinnacle of pistol shooting championships in a few years than other organizations invest in a lifetime. I attended my very first Bianchi Cup in 2009, and in a short five years I’ve seen participation grow massively among shooters, media coverage has increased tremendously, and of course sponsorship dollars are rolling in as well.

In 2014, it’s a pretty easy statement to say that the Bianchi Cup is at the absolute top of the heap of practical pistol matches. Let’s take a look at the other majors that could challenge it:

All of those matches have individual elements to them, but no match combines them like the Cup. In 2011 I would have called it a tie between Steel Challenge and Bianchi Cup, but the current state of Steel Challenge removes it from contention with Bianchi Cup. To illustrate that point, in 2013 Bianchi Cup had more shooters in Open than Steel Challenge had total entrants. What about the other matches? IDPA Nationals has sufficient pageantry and the proper feel of a National level match, but obviously lacks the prize table and cash awards at Bianchi Cup. The many USPSA National matches do have prize tables, but nothing in comparison to Bianchi’s prize table.

Bianchi Cup sits comfortably as king of the practical pistol matches. It’s still growing, with new shooters attending the match each year in ever increasing numbers. With smart leadership, dedicated volunteers, and passionate shooters (such as myself) the future of Bianchi Cup is looking brighter than ever.