Production, Single Stack, and Revolver. If you shoot any of these three divisions (or any IDPA at all) reloads are pretty important to you. One of the best drills for training reloads is the 1 Reload 2 drill. It’s a simple drill, here’s how it goes:

It seems all so simple, right? In many ways it is, but at the same time there are a lot of moving parts in this drill that can fool you into chasing numbers that aren’t as important. Right off the bat, one of the areas in this drill that can lead to unrealistic numbers is the target distance. I’ve seen people shoot this drill with the target at 5 yards, because they’re working on the speed and manipulation part of the drill, and I’ve seen people work it at 10 yards because they want to actually have to aim (a little bit) when they get back on target. That actually does make a difference in your total time. 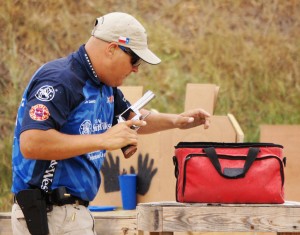 Another area where it’s easy to create false numbers is the first shot. The first shot in this drill doesn’t really matter, you’re just using it to create a split time for the reload. But if you have a really fast first shot, you can chop a few 10ths off the overall time without actually improving the important part of the drill – the reload itself.

The next moving part to watch out for is the first shot after the reload, and is also why I prefer two shots instead of one. It’s easy to do one-shot hoper drills. One shot from the holster and one shot reloads are perfect examples – you draw/reload the gun and establish a grip that’s good enough for one fast shot, but not necessarily for a follow-up shot. I’ve don 1r2 drills where my first shot after the load has been blazing fast, but then I’ve had a 0.50 split for the second shot because I had to fix my grip. Not ideal.

That leads us to the final moving piece of the drill – the last shot. When I’m practicing 1r2, I’ll usually do 10 reps, which gives me 30 shots. Of those 30 shots, I have to have 95% be hits in the designated target zone to “pass.” That means I’m allowed 1.5 misses, and since it’s hard to half-miss a shot, I round that to 1 miss for the evolution. The shot I’m most likely to miss is the last shot, for the reasons noted above.

The key to successfully training the 1r2 is to know what you’re looking for. If you try to track all the moving parts, you’ll end up chasing numbers that may not be important. When I run this, I set up an IDPA target at about 7 yards. The first shot is to the head box, then the two shots after the reload are to the body. The numbers I care about most are the reload split time, and the overall time. I care about the reload split because I’m training reloads, and I care about the overall time because it measures how well I’ve executed several different aspects of the fundamentals of marksmanship. The overall time is also more applicable to actual performance under match conditions than a static single shot reload split.

Try this one out yourself. Pick a target, pick a distance, and know what your training goals are and you’ll have a fun time working on your reloads.