It all started 20 years ago. As a child in the 90s, I was surrounded by images of double-stack wondernines, most prominently the Beretta 92 as featured in Lethal Weapon, Die Hard, and most importantly my dad’s holster. But despite all that, and my continuing love of the Beretta, the revolver had a hold over me. I can pin this largely on two things. The first is a book called Small Arms of the World, a massive coffee table book filled full of, well, the small arms of the world. The edition we had in the house growing up was from the late 70s, which meant that it contained lots of snide little comments from the English authors about the “unreliability” of semi-automatic pistols for police work. I probably read that book cover to cover a dozen times. My parents still have it, the cover’s nearly fallen off and the binding is coming apart, but when I visit, I’ll still occasionally turn those creaky old pages. 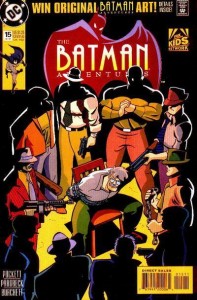 However, even more influential in my revolver fascination was a comic book. Again, as a child of the 90s I had the good fortune to experience a cartoon called Batman: The Animated Series when it was first airing. Nerdier fans of a certain age will fondly remember Batman:TAS as one of the best incarnations of Batman to ever air, and proper nerds will also remember the excellent spin off comic book that it spawned, The Batman Adventures. Issue 15 of The Batman Adventures is pictured at right, and featured Commissioner James Gordon as the primary character. One line from that comic sticks out, when Commissioner Gordon is confronting a group of mob thugs. He says “Now, considering that this is a revolver and my advanced age, I can probably only get the first three of you that move. Who’s it going to be?” 11 year old Caleb thought that line was a pretty badass thing for a cop to say to a room full of gunthugs, and honestly 31 year old Caleb agrees with him.

For whatever reason, that comic cemented in my head that revolvers were the guns that cool old guys carried. This was only further enforced by a steady diet of westerns, and when I was a a couple of years older, Indiana Jones. That’s what I absorbed from pop culture as a kid: cool guys carry revolvers. Even Lethal Weapon reinforced this. Look at the characters: Martin Riggs, a wild-eyed loose cannon carries a modern semi-automatic pistol, spraying bullets everywhere. Meanwhile, old-school cop Roger Murtaugh? All he needs when it gets real are six shots from a k-frame. He’ll revoke your diplomatic immunity with a single head shot from 50 yards away, LIKE A SIR.

It’s interesting looking back and seeing how much pop culture influenced some of my tastes in firearms. What parts of pop culture have influenced your gun buying habits as an adult?