You may have seen on your Facebook news feed that the majority of the midwest is currently colder than the surface of Mars. According to Siri, it’s -6 in Sioux Falls right now. Those are real degrees, not those fakey Celsius degrees mind you. What temps like that mean is that even if you’re just walking to your car from a parking lot, you’re wearing a heavy coat, a hat, and probably gloves.

The gloves are the area that causes the most problems for shooters, because even if you’re a smart cookie that carries an extra gun in your coat’s external pocket, there are plenty of guns that don’t have trigger guards large enough to accommodate even the smallest of leather gloves. So what’s a gun nut to do? You don’t want cold hands, but you still need to be able to run your gun if things go bad. The first option is to get a set of tactical gloves from a company like Oakley, or you could think outside the box for a second. 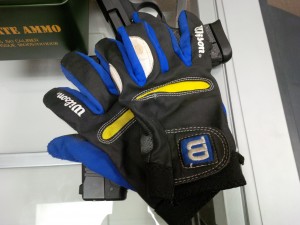 Those are a pair of Wilson batting gloves that I’ve had for a few years. They’re not as warm as winter gloves, and obviously not very stylish, but they do provide adequate protection for my hands for minimal amounts of exposure. I wouldn’t want to try and survive in the wild for a long time, but for walking to my car or to and from the bank they’re perfect. The gloves provide enough grip that I won’t lose the gun, but they’re dexterous enough that I can actually perform all the gun’s manipulations without issue as well.

The big problem with these gloves is that they’re hideously ugly. If you want a cold weather option that doesn’t look like you’re right off the short bus, the Franklin Cold Weather Pro Batting Gloves

look like relatively normal gloves. They’re black with just a simple white Franklin logo on the back, and have the advantage that you can use them to train and for EDC cold weather gloves.

When choosing the best gear for concealed carry, remember that you don’t always have to look inside the bucket that contains tactical gear only. There are plenty of sports out there that produce excellent gear for inclement weather, and have invested a lot more time and money in researching that gear than the shooting sports ever will.