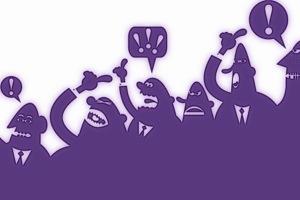 We’ve all heard the arguments from the antis, but one of the thing that I notice both sides doing, that drives me baty, is arguing with they’re own side. Please understand, I don’t mean in-fighting, I mean discussing the issues with those who already agree with your side, and then walking away feeling as though you’ve accomplished anything. I’ve seen this happen at the range, but it’s rare for me to glimpse the other side mimicing the behavior.

Here is a conversation caught on Facebook. A friend posted a link last week from a biased news source. She then replied to her own link post with the news from Starbucks. Then her friends, who were in agreement, chimed in with more of the same… Later I noticed the entire post and comments had been removed. Hopefully the poster realized that there was no point to the entire feed and that’s why it was deleted. Personally, I’d love to discuss these women’s feelings of “safety” and their versions of a “threat”. I imagine that there is a whole lot they are not considering.

(Names have been removed to maintain anonymity.)

American Gun Deaths to Exceed Traffic Fatalities by 2015 from www.bloomberg.com
Guns and cars have long been among the leading causes of non-medical deaths in the U.S. By 2015, firearm fatalities will probably exceed traffic fatalities for the first time, based on data compiled by Bloomberg.

MS If you’re looking for a safe place to mull this over, though: http://www.buzzfeed.com/…

JW Am glad to be living in a part of the world where gun deaths are extremely low and I feel safe walking down the street.

MS I feel blessed to live in an area where walking down the street is not an issue, so much;
But that’s what makes a lot of the conversation so ridiculous. People are not safer because I’m safe. It’s all theory unless you’re in Compton or in Chicago; it’s all about the 2nd Amendment and protecting an interpretation of its words, until you know someone who accidentally got mixed up with a psycho.
I’m NOT feeling blessed to live somewhere where people more stringently defend the pyscho’s right to “bear arms”, even with a criminal record and a long list of threats, than the rights of my friend to walk into and out of her home feeling safe. That’s my issue right now.
Too many deaths. I refuse to preference an interpretation above these numbers.

CB The idea of guns been legal and anyone could have one feels so bizarre to me, I know that obviously there are illegal ones in the uk and legal ones for hunting, but the laws are strict and the idea of a neighbour just owning a gun seems to weird.

MS The home protection notion is pervasive. I don’t know where it comes from, exactly, but I feel like maybe we’ve been sold a myth that we’re continually unsafe (unless we have talismans, and guns are made the most desirable of those).

JW Yes, I never understood that. ‘I need a gun to protect me and my family’, from who exactly? How many more mass shootings, children accidentally shooting themselves or their little friends do we need to witness before something finally changes?

MS RIGHT? No. I don’t live in Compton, and neither do you (it’s a layer of privilege that really bothers me; that phrase usually gets uttered by people who’re actually in very safe areas, and who lack awareness of their privilege/of what those who lack it face on a daily basis). Their are no boogeymen waiting to break into my home. I have never, ever felt safer in the presence of a gun.

CB Yeah that makes sense. Whenever I hear the argument for guns is that they need to be protected. It feels by that logic that places with no guns would be overwhelmed in crime. I just don’t understand how these shootings can happen, they can say how sad it is but still say that the ease of gun access is justified…