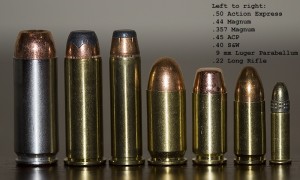 #10 – 10mm
10mm makes the list, but only just barely because it is an interesting historical curiosity in the development of modern handgun ammo. Its history is a complex one full of misinformation, bad science, and government incompetence. To this day, it has a small, but dedicated and often insanely loyal following who still cling to the dying fire of the 10mm.

#9 – .38 S&W
Why is .38 S&W on this list? Not because of its popularity in America, but because under the name .38/200 it served for over 30 years in the holsters of the British and Commonwealth military forces, and soldiered on for years after that as the police revolver of those same nations. It was eventually phased out in Commonwealth use for the 9mm cartridge fired from the BHP. The .38/200 was chambered in a number of revolvers during WW2, with the most notable being the Webley Mk IV and the Enfield No. 2.

#8 – .380 ACP
The .380 makes the list for one simple reason. It is arguably responsible for more indirect fatalities than any other round; as a .380 was used to assassinate Franz Ferdinand and kick off World War 1. It’s an interesting design, and one of the family of “ACP” cartridges invented by the great John Moses Browning, but if it weren’t for that little historical note, wouldn’t have made our list.

#7 – .45 Colt
There are few more evocative phrases in the firearms community than “Colt 45”. Depending on the era, you could be referring either to a 1911, or to the original .45 caliber service pistol, the Colt Single Action Army. The .45 Colt cartridge fired out of the SAA was adopted in 1873 and served for almost 20 years. 140 years later, it’s still a viable choice for handgun hunting, self-defense, and competition shooting. One of the world’s all-time great cartridges, and one of the most versatile.

#6 – .38 Special
I don’t really have to justify the .38 Special making this list, but perhaps I’d have to justify why it’s not in the top 5. While it’s dropped down to number six in favor of other cartridges, one could easily make the argument over brown liquor that it, and not the cartridge selected is the greatest handgun cartridge of all time. Certainly, there is no more ubiquitous revolver cartridge than the .38 Special, and over the 115 years of its existence it has certainly put a lot of food on tables and bodies in the dirt. Like others on the list, despite its age, it is still a viable choice for self-defense even to this day.

#5 – .455 Webley
The cartridge of an Empire. Served from 1891 until World War II, and was used in the legendary and iconic Webley revolvers. It’s been around forever, and at least for me is mentally linked to some of the most interesting periods in history, which are frequently glossed over by American firearms enthusiasts. When I think of the .455 Webley, I think of box formations of British infantrymen fighting off hordes of spear-chucking tribals, with officers standing in the midst of the formations calmly firing their Webleys at targets of opportunity.

#4 – .44 Magnum
“Do you feel lucky?” “Go ahead, make my day.” The .44 Magnum is quite simply, legendary. Its use by Clint Eastwood in the Dirty Harry movies catapulted it from obscure hunting cartridge to American icon, and it’s remained such ever since. Sure, there are handgun cartridges that are better for hunting, and cartridges better for self-defense, but the .44 Magnum is simply one of the greatest cartridges ever.

#3 – .45 ACP
The .45 ACP coming in at #3 will either make people nod their heads in agreement, or howl in indignation that it’s only #3. The .45 ACP was a return to our large caliber roots in the military, replacing a slew of less effective .38 cartridges that the military deemed insufficiently powerful. From its adoption in 1911 until being phased out in favor of the 9mm, the .45 ACP traveled the world and killed interesting people. It’s as American as apple pie and punching hippies.

#2 – .357 Magnum
These days, most guns chambered in .357 Magnum will likely see only a handful of true magnum loads. Most will be shot with .38 Special +P their entire lives, and never see the wear and tear of true magnum force. But the .357 Magnum is perhaps the most versatile cartridge in existence today. Loaded up with 200 grain hardcast bullets and it will kill most things that walk in North America, and yet loaded with 158 grain JHP it’s an effective and controllable self-defense round. Only its relatively short service life keeps it out of the number one spot.

#1 – 9mm Parabellum
You know it had to be the 9mm. It’s 111 years old, and it’s still the caliber of choice for the armies of the first world and discerning law enforcement agencies. Quite simply, for self-defense and law enforcement, the 9mm Luger is the only cartridge you’ll ever need. With modern hollowpoint bullets its terminal performance is the same as other calibers. Despite the complaints, 9mm ball ammo has put a lot of bodies in the dirt over the last 110 years as well. The 9mm Luger is the greatest handgun cartridge of all time.