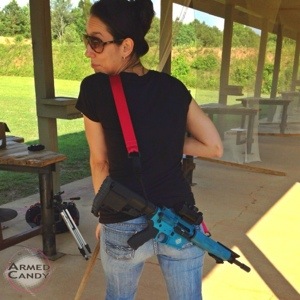 Recently, I posted about and questioned, why I primarily date gun guys. Most of you have very good ideas and comments. Those comments kept me thinking for many days, until I came to this conclusion.

Guns are not like other hobbies. The government isn’t debating my right to garden. Nobody is worried about legislators taking away my right to cook. A crafting accident has never ended with someone fatally wounded (that I know of). Criminals are not using camping as technique to carry out illegal activities (again, as far as I am aware). However, by going to the gun range, owning a gun and enjoying shooting, I am throwing myself into a long list of heated issues.

Certain beliefs and traits are center around gun ownership. Generally speaking, gun ownership shows that I feel a certain way about preparedness. It also shows that I respect my self enough to take on my own self defense. Owning a tool that some Americans feel should be highly regulated or illegal, means that I fall clearly, on one side, (and not on the other) of that issue. These details alone, would rule out a large quantity of the single male population in Atlanta, as well as the country.

Then we should add, the fact that I don’t just own guns, but I believe strongly in training and regularly using these tools. This means that I respect the power that a firearm contains and I believe that ownership of a gun of a gun is a weighty responsibility. Again this would rule out a certain group of suitors. Finally, I am a woman who finds the sport of shooting, fun and empowering, and while I’m sure that speaks volumes about my psyche, it probably also categorizes me as a certain type of woman. A certain type of woman who only connects with a certain type of man.