The team here at Gun Nuts are big proponents of training. Whether it’s for self-defense or competition shooting, I have espoused the belief that you should always seek to sharpen your skills. It’s a mindset that I require from people who write for the site as well. I want motivated shooters, people looking to learn. 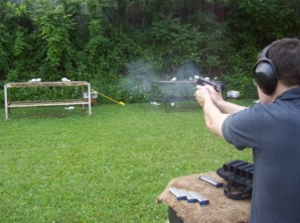 At the right, you can see Genesis…at least for me. This is where I started in the action shooting sports, rocking bowling pins at Marion County Fish and Game outside Indianapolis. Prior to that, I had shot NRA Collegiate pistol, but these pin matches were my first real exposure to anything more dynamic than bullseye. I was hooked. I got pretty good at these matches fairly quickly, to the point that I’d win them more often than not, and I started wanting more, so I got into IDPA. I shot IDPA almost exclusively for two years, and didn’t really get into USPSA until late 2010. I am dedicated to the shooting sports, and passionate about improving my skills as they apply to the shooting sports.

The reason that background is important is it applies to the topic of this post – how good is good enough? We’re talking about this today because it’s an important question to ask yourself as you seek out training and seek out furthering your skills in the shooting sports. For me, as a competitor, there is no “good enough.” I can’t be too accurate or too fast. One of the nice things about the shooting sports is that there are plenty of objective measures of how good you are as well – match scores don’t lie. I guess if I ever shot a 1920-192x at Bianchi Cup I’d be able to consider myself “accurate enough”, but since that’s literally never been done, I don’t see that happening. But, as this question applies to me, the answer is “there is no good enough.” The champions don’t stop training just because they’ve reached the pinnacle of the sport. Doug Koenig doesn’t phone in his Bianchi Cup training just because he’s the winningest shooter in the history of the match, he still goes out there and trains. There’s always just a little bit better.

Now here’s the important part of this post – my standards aren’t everyone’s standards. What about the accountant that only shoots every other weekend, and isn’t interested in winning Bianchi Cup? What about the mother of two who only carries a pistol to defend her family from violent criminals? Where is their bar for “good enough?” That’s actually a very difficult question to answer, because it would seem that you need to create an objective standard of performance. But it’s made more complicated by the fact that plenty of relatively unskilled people have successfully used firearms to defend themselves without taking 24 hours of range/class time and firing 5,000 rounds.

I may not like it, but I accept the reality that not everyone wants to spend their leisure time dry firing, shooting matches, or attending classes. That stuff all costs time and money, which many people would rather spend golfing, with their families, playing video games, or any one of a million other recreational activities. That means that good enough is going to be subjective from person to person…and that’s okay. Ultimately, whatever you as the individual shooter decide is “good enough” for you, is in fact good enough. However, if you ever decide to step outside that particular comfort zone, you must be prepared to accept that your definition of “good enough” may not be very good at all. When I stepped out of my “good enough to win bowling pin matches” comfort zone and into IDPA, I had to accept that bowling pin good wasn’t good enough for IDPA. Then going from IDPA to USPSA, I had to accept that being an IDPA Master wasn’t good enough for USPSA. And so it goes as I seek to improve my skills.

Be comfortable with your skills. Find your personal good enough, but if you chose to expand it, be ready for the reality that your good enough…may not be.