Since Bianchi Cup, I’ve not had a lot of range time. The business of GunUp and Gun Nuts has predictably intruded on my ability to put rounds through the Colt, thus why updates have been nearly a month apart this time. However, with the discovery of an amazing local outdoor range in the Sioux Falls area and a re-written training plan, expect those updates to increase. 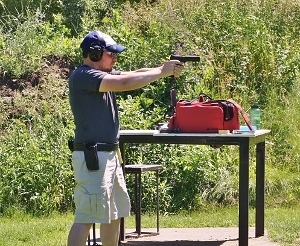 On Thursday I had the chance to run a 200+ round training session with 400 using some Wilson Combat Match Ammo. This load uses a 200 grain Hornady Action Pistol bullet at a stated muzzle velocity of 865 FPS. That gives a listed power factor of 173. Lacking a chrono I couldn’t verify any of those, however the gun did shoot very soft and very flat with these rounds. Softer in fact than the Black Hills 200 grain LSWC that I’d used at Single Stack Nats. Accuracy was top notch with the Wilson loads, which I’ve come to expect from any load using a HAP bullet. Additionally, the Wilson ammo ran without a hitch for all 200 rounds. While it’s not an exhaustive test, 200 rounds is my threshold for reliability before I’ll use a particular gun/ammo combo in a match. I’ve got 300 rounds of the Wilson left, and I’ll be running it at this weekend’s Great Plains Sectional match.

Interestingly, 440 did experience another feedway stoppage using the 200 grain Black Hills LSWC ammo. This was using Wilson Combat Elite Tactical Magazines, which never liked feeding the SWC rounds as well as the CMC mags. After some thought, I’ve decided to recalculate the failures of 440 and remove any feedway stoppages with SWC wadcutter ammo and add an asterisks that indicates consistent feed issues with SWC ammo regardless of magazine type and gun condition.

I will probably detail strip and clean the gun on Wednesday after my Tuesday practice session. That allows me to shoot it on Thursday and check for any issues that may have cropped up prior to Saturday’s Section match. This week’s testing will be with some Freedom Munitions ammo, as well as finally breaking into the Hornady Steel Match supply I have.