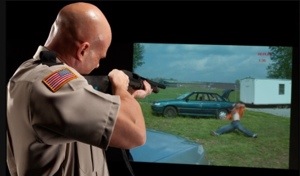 While in the process of attempting to recreate real-life defensive shooting scenarios for our learning pleasure, I thought back to some training I received about a year ago. I was lucky enough to be instructed on the running of a simulator system, by first “living” the simulations myself. The system I speak of, is one of the most realistic training devices available and belongs to Sandy Springs Police Department in North West Georgia. It is Meggitt’s “FATS” or, Firearms Training Simulator and it is capable of recreating almost every situation a officer might encounter, including returned fire. However, it can also make a great instructional tool for anyone considering a gun for self defense.

Standing in front of an extra large, life sized screen the “trainee” begins a scenario with a few instructions from the system. One is told where they are and the general information about the scene that will follow. In one simulation, I’m told that I am at home and that I hear a noise in an upstairs bedroom. In another I am approaching my car in a parking lot when I see two “unsavory characters” rifling through my vehicle. Obviously, these are situations from the “civilian” mode, but there are also police based concepts and more.

The situation plays out with differing results based on the instructors selections on the computer. When I enter the room in which a noise was heard, a cat, hops off the bed and all is well, but even if I ran the same story-line again, I could find differing results. In one case, a stranger busts through my “front door”, only to surrender immediately; but the same stranger may also lunge at me with a knife, or go from hands in the air to drawing his gun and firing on me.

In each case I may be armed with a selection of completely realistic weapons; A Glock 17, a taser, or an AR15, just to name a few. These are completely realistic weapons, except that they are loaded with a magazine full of CO2 rather than live rounds. These weapons cycle realistically, and may even fail, depending on the instructors choices. However, after the scenario commences, and I am told how many of my shots are “misses”, “hits”, or “kills” (head shots only). This is when the real learning can occur. A good in instructor, like the former Air Marshal and SWAT officer, I worked with, will sit down and discuss the previous scenario and all the details and considerations one might deal with, in real life.

For me this discussion included obvious notes like, if you approach your car in a parking lot and see it has been broken into and the perpetrator is still on the scene, do not engage him in a fire fight. Keep walking to safe location and call 911. Some concepts/solutions might seem obvious or over simplified, but the benefits of thinking these scenarios through, before they occur, can be life saving.