Shelley and Gabby have been posting about women in the gun industry for a couple of week’s now. I strongly suggest reading their posts in this order before coming back and finishing this post. 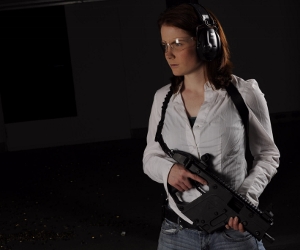 Now, what’s interesting to me is that Gabby and Shelley kind of talk past each other, as they couch the issue in their own experiences in the firearms industry. Gabby talks about how women in the firearms industry interact with one another, while Shelley focuses on how women entering the firearms industry can establish credibility. It’s interesting to me as an outside observer to note all these things on top of the observations created by the comments. Gabby’s first post contained some poorly worded sentences that made many readers assume she was saying that women in the firearms industry were not treated the same as their male counterparts; that wasn’t the point of the post but it did open up that avenue for discussion. Shelley’s post had some people assuming incorrectly that she was saying that new female bloggers and writers aren’t qualified to comment on firearms; obviously that’s not the case either. For me, the assumptions made by male readers is the most interesting part of reading Shelley and Gabby’s posts, because people’s assumptions and following comments reveal the blind spots in their own reasoning.

Which interestingly leads me around to the point of this post, which is to share my opinion on “women in the gun industry” as an interested 3rd party. This may come as a shock to you, but it’s the same as every other industry. In the firearms industry, there are women in senior positions of leadership, there are smart, talented women writers and trainers, and there are intelligent, technical women working in engineering and production. There are also women with little or no actual talent or skills beyond “looking good” and “self-promotion”; there are women who are catty with other women and women who will do anything to get ahead.

This is exactly the same as every other industry, and interestingly enough it’s exactly the same as men in the gun industry. It really is. Sure, we criticize when we see pictures of “gun bimbos” in bikinis with their fingers on the trigger, but we’re less likely to criticize the Tactical Porn aimed at men of operators operating in operational environments…frequently incorrectly or with inappropriate gear. I will say I’ve noticed a rising trend in the professional training community of calling out frauds and phonies, and that’s a good thing, but based on my own unscientific research, I’d still say that criticism of men engaging in stupid, attention-whoring behavior is less frequent than criticism of women engaged in such.

But the point here is that I’ve seen all the same behaviors that we’re so quick to criticize in women performed by men in the gun industry. So what’s the big deal? Why do you think that the “women’s issues” as they reflect on the gun industry attract what, to me, is an undue level of attention?