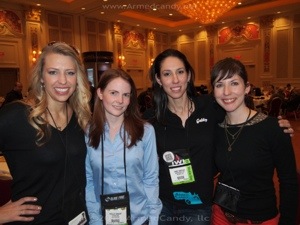 There was probably an audible grumble, the first time a woman took a job in this industry. Regardless of whether they were excited about it or not, men have slowly, accepted the change. I venture to guess that it wasn’t a risk of being caught sexually harassing, that worried the gun guys, but the girly behavior that often seems to follow us ladies.

Allow me to explain. I’ve worked in offices under female management. I didn’t like it. One, specific situation comes to mind. It was a male dominated office with a female office manager. She managed the day to day of all the guys on the team, and she probably did a great job. Then I joined the team and became part of her management responsibilities.

At first she only seemed uncomfortable with the change, forgetting to put me on spreadsheets or include me on team emails. However, after some time, it became clear that this was more than an random accidents. She would often nit-pick my work when the guys saw no issues with it. Her criticisms, seemed to walk the line between personal and professional. She didn’t have a problem when she was the only woman in the office, but then there was two… Unfortunately, this situation is all too common when women work together. The bottom line, cattiness.

However, this industry is just a little different from the others. People don’t work in the firearms industry because it’s the only job they could find, something within them is drawn to the gun world. I’m sure I’m not the only lady who was given the warning as I considered a career in guns, “Beware of the boys-club!” But for those who were not scared away, we put on our big girl panties and headed into the cigar smoke.

Maybe we were all too focused on preparing to battle with men, maybe we’re a different breed of lady, but somewhere near the boys-club, a sisterhood has formed. Rather than being unfriendly and guarded, female firearms professionals are happy, welcoming and supportive of one another. Don’t get me wrong, these are some tough women. You wouldn’t want to surprise anyone of them in a dark alley. However, if one were having a personal or professional problem, she could count on more than one fellow gun-girl to be by her side.