Yesterday I threw a post up with some quick rant-style thoughts on the state of the professional firearms training community. Read “You are not an operator” before you read this post; I can honestly say that if I’d known when I was writing it that it would be the most popular post on Gun Nuts yesterday, I probably would have spent more than 10 minutes writing it. 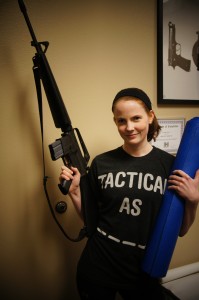 Because of the popularity of that post, I wanted to write a sequel that fleshed out my thoughts on the issue. To understand my frustration, you have to understand the problem first: we are in somewhat of a golden age of training, because right now more so than ever we have an incredibly supply of qualified, professional trainers to teach everything from Basic Marksmanship all the way up to Advanced Tactics for the Space Shuttle Door Gunner. That’s a good thing. It’s also a good thing that more students are seeking professional training, and are expanding their knowledge and skills.

So far, so good. Unfortunately, here comes the bad part. Because there is such a glut of trainers out there, and because all one has to do to become a trainer is say “now I’m a firearms trainer” there is a considerable community of trainers out there teaching things that they’re not qualified to teach. Or worse, teaching skills to students who either aren’t ready for them or have no use for them. For example, putting stacking drills or room clearing drills in a Carbine 101 level course is a little over the top, and can create a dangerous environment for the students.

This has resulted in the different types of trainers offering classes that break down into three very broad categories.

In the marksmanship category you’ll find everyone from NRA basic instructors all the way up to USPSA Grandmasters. They’re here to teach you how to shoot your gun better; with better defined as “better than you current skill level.” There are different approaches, different styles, but fundamentally the purpose of the class is the same.

In the home and self-defense, you’ll still find a wide array of teachers, and also where the waters begin to muddy somewhat. Because these classes aren’t presenting pure shooting problems like the marksmanship classes, a certain level of tactical and strategic instruction is in order. Further complicating the issue is that everyone’s personal tactical situation is going to be different – what you need to train for as a father of three children is different than what a single woman living alone may need to train for. So if your trainer recommends a one size fits all solution, maybe it’s time to move on.

The last level of training are the Operator Camps; and before I go any further I want to say this: I think these are totally awesome and a lot of fun. Running around for a weekend with a plate carrier and a rifle shouting “THREAT” and stuff while shooting is the firearms equivalent of going to a racing school weekend. You probably will learn something you can apply in every day life, but for the most part you’re doing it because it’s fun. And you know what? That’s totally okay. Fun is good, and we should all have fun with our guns. But to the point of these Operator Camps – lots and lots of people are offering this sort of “tactical training” experience these days. Not all of them are qualified to teach it. I’m reminded of a recent incident where a well known instructor from a former Russian military unit utterly failed basic training safety and ended up shooting his assistant instructor. That’s a guy I don’t want to take a class from, ever. But unfortunately, that’s fairly common. Someone could spend 4 years in the military as a medic and pop out thinking they’re qualified to teach a combat rifle course, or a guy could spend 4 years in the Coast Guard and come out teaching a sniper course.

To help clear things up, here’s a list of instructors that I personally would recommend taking classes from. All of the instructors on the list I’ve either personally attended one of their classes or had them highly recommended to me by people whose opinion I trust.

That’s my shortlist – either guys I want to classes from, or guys that I have trained with. There are quite a few other solid trainers out there. Be wary of people teaching out of their lane, or guys that are throwing “high speed” techniques into classes that don’t need them. But most of all, find someone reputable, and go train.