In the two weeks since the last Colt Report, the gun has seen an additional 568 rounds fired, which I’ll admit is a pretty low total for two weeks. 247 of those rounds were fired at the 2013 Single Stack Nationals, with the 200 grain LDSWC bullets that had caused problems in the past. However, at SS Nats, those rounds worked fine, with the only issue coming on a failure to feed during a weak hand string of fire that if I’m honest, I totally limp-wristed the gun. 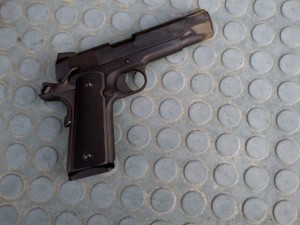 Switching gears to train for Bianchi Cup, I’ve also switched ammo back to the 185 grain SWC that had, up to yesterday been perfectly reliable in the gun. However, during a training session at the range yesterday, I started getting failures to feed; the round would partially enter the chamber and then hang up. After a couple of discussions, the conclusion was the the gun needed to be cleaned; a check of my logs shows that the last time I properly cleaned the gun was April 5th. In the interval between April 5th and now, the gun’s fired over 1600 rounds, with the only attention being “throw some more oil on it.” Unfortunately, feeding the shorter OAL 185 grain SWC requires a clean gun without a lot of junk in it, so it’s time to break out the hot water, dish soap, and old toothbrush.

Apparently, the formula of National Match barrel + well fitted gun + light loads + light spring + no cleaning = malfunctions. Whoops. In a way I’m glad this happened though, because a big part of testing these guns is getting a maintenance cycle for them. I can’t just shoot 5,000 rounds through it and occasionally squirt oil on it; accepting that fact and building a sustainable maintenance cycle is just as an important part of training with this gun as actually shooting it.

On the shooting front, the accuracy testing for Bianchi Cup went well; from a regular two handed standing position, the Colt will easily shoot magazine after magazine into the four inch x-ring of a Bianchi Cup target. My accuracy shooting was a little rough yesterday; when I added par times to the shooting I found myself snatching the trigger a little bit and tossing the occasional hit down and to the left. I’ll have plenty of opportunity on the practice range to fix that starting on Sunday. Next week’s Colt report should include a lot more rounds, since training for the Cup at the practice range means lots of shooting.