No one has any ammo. Shooters that do have ammo are loathe to actually shoot it for fear that they won’t be able to replenish their vital stores. No one wants to fire their last round of ammo and then wonder how they’re going to continue to feed their hobby now. 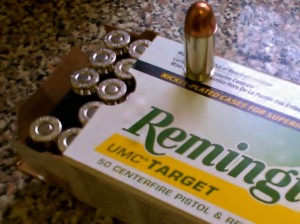 There are solutions to the ammo shortage that will allow you to keep shooting, but you have to be smart, and be willing to spend money when the time is right. Because the first thing you need to do to “solve” your own personal ammo crisis is accept that pricing is probably not going to be back at 2011 levels any time soon.

The major ammo manufacturers are turning their presses non-stop to make ammo and they’re still behind. So prices are necessarily going to go up from manufacturer’s to distributors, distributors to dealers, and dealers to you. It’s economics and it sucks, because this was already a pretty expensive hobby as it. Now, there are certainly some companies that are charging outlandish prices for ammo and I don’t support that, but for the most part we have to accept that the days of $220 for 1000 rounds of 9mm are over. So, again, the most important step to getting over the ammo crisis is accept that prices are what they are and if you want bullets you’re going to have to pay them.

The second step is knowing not so much where, but rather when to look for ammo. Lucky Gunner had cases of 9mm in stock last week, but if you didn’t look early in the morning they were gone. Retailers will sell out as fast as they can get rounds in, so if you’re not looking early then you’ll frequently miss the boat.

Knowing where to look is important as well; smaller shops frequently have rounds available at prices that would have made 2011 Caleb laugh in disdain, but as I mentioned above it’s not 2011 any more. Gunbroker also has ammo available; and there are even good deals to be had on Gunbroker if you’re patient and willing to wade through all the usual garbage on GB.

For once, the situation is just as bad if not worse for reloaders than it is for people who just buy their ammo. Primers are even more difficult to find than loaded ammo, and the major manufacturers of reloading components are dedicating the majority of their time to manufacturing complete ammo. Components are scare and getting harder and harder to find, brass is going up in cost, lead is going up in cost, and things are generally bad across the board for reloaders as well as factory ammo guys.

Ammo is hard to find. But it’s out there. Pricing…well, it’s not so great. But the reality is that we live in a world right now of $400 for cases of 9mm FMJ and $500+ for .45 ACP. That’s just supply and demand, and while I may not have to like paying those prices, it is what it is. Is there an end in sight? Sure. I imagine that by April or May most of the drama will have died down and we’ll see a return to normal supply levels, which will cause prices to drop. But I don’t think we’ll see prices drop below $300 for 1000 rounds of 9mm for even longer after that. After the 2008/2009 ammo crisis, it took almost a year for prices to drop back down to 2007 levels, and I think we’re going to be in this mess for even longer.

Unfortunately, the solution to the ammo crisis isn’t really great. If you want to keep shooting, be willing to pay more to feed your guns. There are still deals out there, and if you’ve got a line on ammo at a reasonable price, I’d recommend grabbing it now before it’s too late.