Shooting a .45 in competition has certain complications that you don’t face with a 9mm pistol. Most 9mm factory ammo makes the necessary power factor without being over loaded, so if you find an accurate factory load for your pistol, you’re set. .45 ACP ammo on the other hand is a bit more complicated, since most factory rounds are loaded to about a 190 power factor. 190 is a bit overkill for USPSA and IDPA, so shooters are left with the choice of buying factory match ammo or reloading. 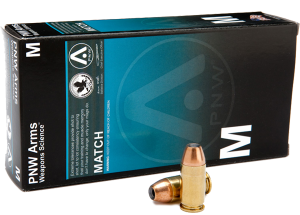 The problem with buying match ammo in .45 ACP is that some of it is just loaded to the same PF as the regular stuff, and then another type is loaded to a very low minor PF for bullseye shooting. So when I bought some PNW Arms .45 ACP Match on the recommendation of a friend, I honestly had no idea what to expect from the ammo.

First things first: this is not budget blasting ammo. At ~$30 per box, it’s priced the same as match ammo, which then brings us to the question of whether or not it shoots like match ammo. Short answer: yes. More complicated answer: yes, but in a way that sort of makes me nervous about using it at a match. To explain, here’s a snip from the PNW website description:

If you do the math, that works out to a 157 power factor, which is minor. While you could still compete with it, you’d get bodybagged for scoring 0.75 as many points on Charlie hits as your competitors scoring major. However, when I fired it over a chrono, here my results for three shots:

Aside from the awesomely consistent velocity spread, which indicates good quality control and component selection, those velocity figures would put the round JUST over the hill into major power factor territory. But because it’s right on the line like that, if I was taking this to a major match, I’d approach the chrono stage with a lot of trepidation. Going minor would be a really lousy thing to have happen at my first USPSA Nationals.

But that aside, let’s look at the ammo itself, which is exactly what I’ve come to expect from PNW Arms: excellent. Accuracy was superb, out my Colt CCG the PNW Arms Match ammo shot a 1.72 inch group at 25 yards from a rested position. If you’re shooting indoors, there is a considerable bit of muzzle flash with the ammo, and the report is very sharp. However, in my CCG with a 14 pound recoil spring, it really is like shooting a 9mm. With PNW Arms Match .45, it was like shooting a hot 9mm out of an all steel 1911. In other words, a lot of fun.

I’m definitely going to be using this ammo for Steel Challenge and Bianchi Cup; while I’m still on the fence about shooting it for USPSA or IDPA matches where power factor matters, if you need match .45 ACP, I would recommend this stuff without hesitation. I liked my first batch so much I’m ordering another 2,000 rounds now.