I really enjoy shooting 147gr 9mm ammo – most competitive shooters agree that it has a much softer recoil impulse than 115 grain 9mm ammo and it’s generally the preferred bullet weight for competitors.  Knowing that I’ve been curious about Fiocchi’s 158 grain round in the past, and despite hearing mixed reviews, I decided to that we should take them and run them through the Ruger SR9c that is getting shot in the Quest for Master Class. 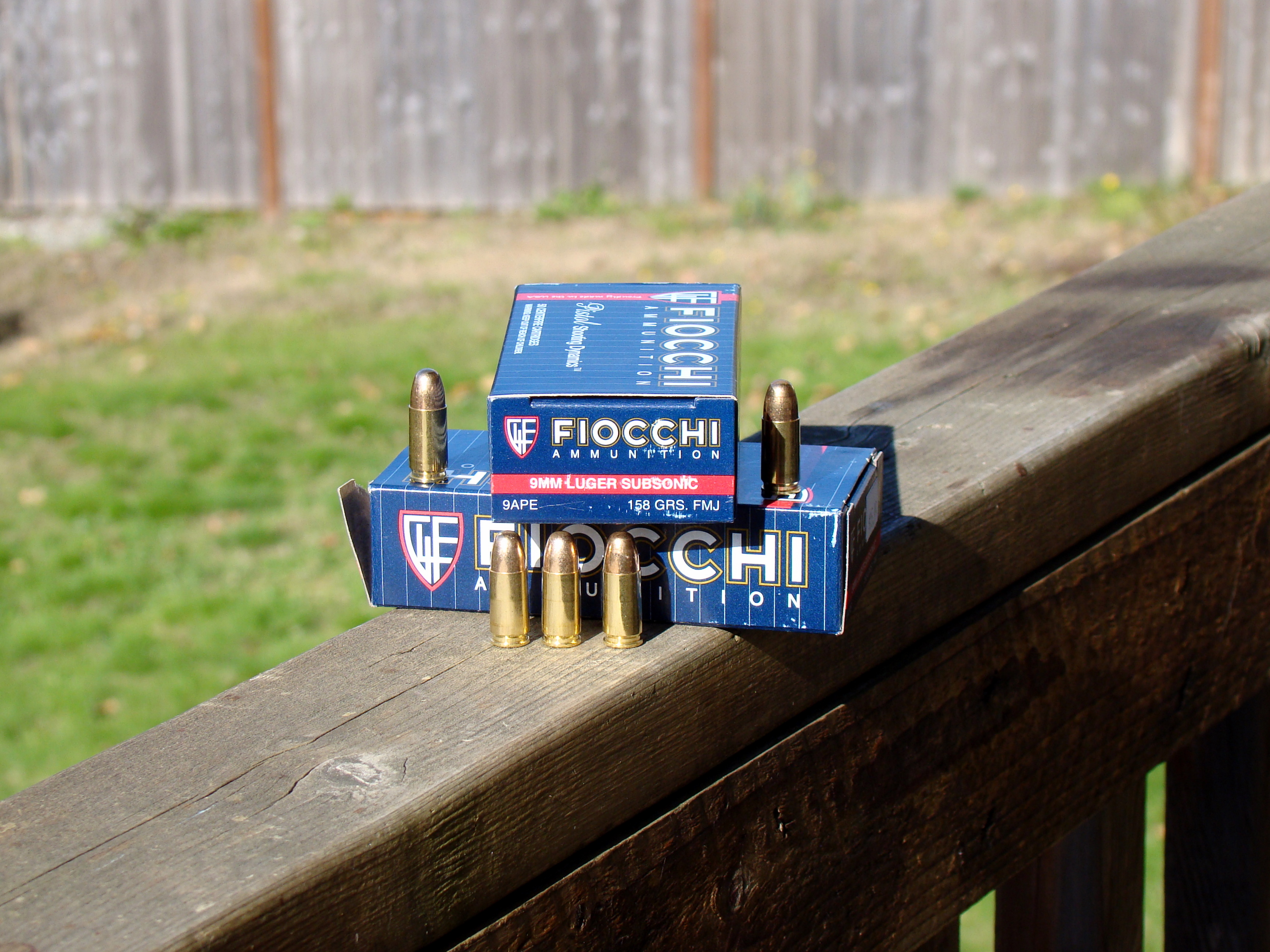 I’ve had good experience with Fiocchi ammo in the past, their .38 Special ammo is actually loaded hot enough to make power factor in IDPA, which is unusual for factory .38 Special ammo.  The specs say that the 9mm ammo is loaded to 950 FPS, which with a 158 grain bullet gives us a power factor of 150, well over the 125 needed to make minor in USPSA.  Of course, as usual the factory specs for the round were higher than what I recorded, with an average muzzle velocity of 884 for 10 rounds.  Assuming everything performs to that muzzle velocity, with a 158 grain bullet you’re looking at 139 power factor, again still good to go for USPSA.  Of course, the real question is “how well do they shoot”?  The best way to find out is to load up and hit the range; as usual I took the trusty Ruger SR9c that has fired thousands of rounds in the pursuit for Stock Service Pistol master.

For comparison, I fired some 147 grain Winchester FMJ ammo; the 147 loads are my favorite for competition as the recoil impulse is much more of a “shove” than the usual snap you receive from 115 and some 125 grain 9mm loadings.  When compared to the 147, I couldn’t tell a difference in the recoil impulse for the 158 grain Fiocchi load; it felt light and there was very little muzzle flip, which is generally what I’m looking for in a competition round.  Accuracy was excellent – again, no surprises here.  The Fiocchi was capable of putting 98 rounds in the same hole, and while I didn’t bench rest the gun (because that’s just silly) I have no reason to doubt that this would make an excellent load for weekend IDPA or USPSA matches.

Which brings me to the competition aspect of this round; i.e. would I use this instead of 147 grain ammo.  The answer is “yes”; absolutely.  There’s a reason there is a case of it sitting in my Subaru in fact.  One of the issues with competing with the sub-compact Ruger SR9c is making power factor out of the short barrel.  At the Indiana USPSA Section Championship, I almost didn’t make Minor due to the loss of velocity.  As mentioned above, Fiocchi claims it’s loaded to 950 FPS, experience tells me I’ll lose up to 100 FPS from factory specs when I’m getting chrony’d under match conditions; the nice thing about using a 158 grain bullet is that I only need 792 FPS to make Minor in USPSA.

If you’re in the Seattle Metro area, you can purchase the Fiocchi 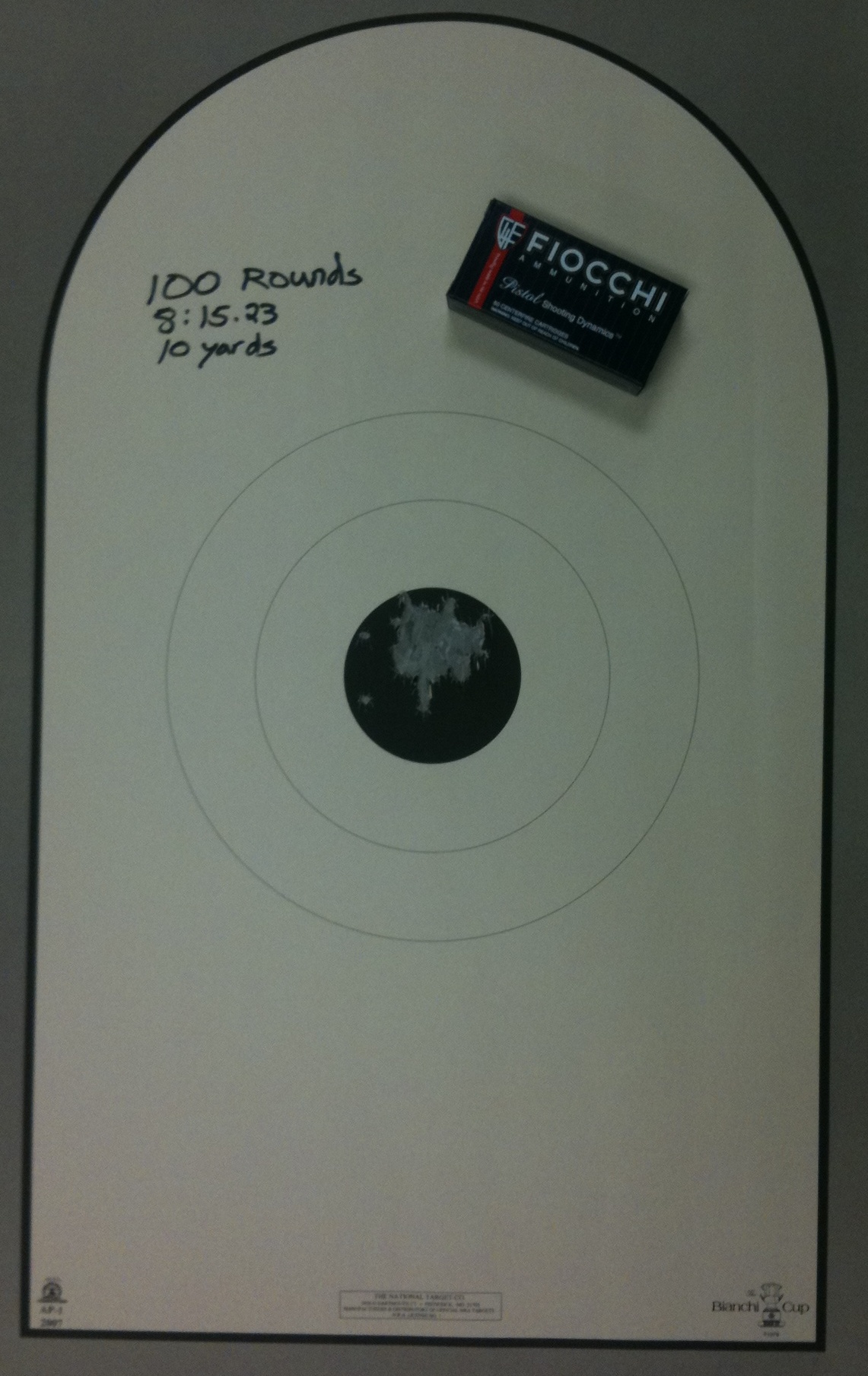 158 grain ammo from West Coast Armory in Bellevue otherwise it’s available online from our friends at LuckyGunner.Com in 50 round boxes or 1000 round cases.  I was really impressed with how this ammo performed out of my sub-compact Ruger SR9c, shooting this group under time constraints at 10 yards was not easy.  I doubt I could have pulled this off if I was using harder recoiling ammo like 115 grain FMJ – the soft recoil impulse of the 158 grain ammo really made it easy to stay on target while shooting the 100/10/10 Drill.

If you’re looking to mix up your ammo selection and thinking about trying some subsonic stuff, give the Fiocchi 158 grain FMJ a look.  You might just like it!