For the first 50 rounds I decided to use Browning’s Practice/Target ammo in 230 grain.  I know that Bill Wilson is on record stating the smaller 1911’s run better with lighter bullets, preferably 185 grain.  I plan on trying some of them but these were what I had available. 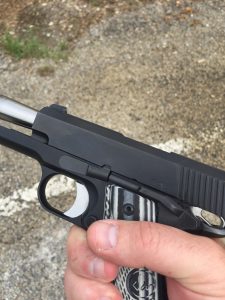 So how did it do?  Not good.  Not good at all.  Literally every three rounds, for the first 36 rounds, the slide locked back.  In the photos to the left you can see where the slide stop just barely caught the slide.  I tried using a different grip, even trying strong hand only once.  It didn’t make a difference.  This thing would simply discharge three rounds then lock the slide back.  The problem could be the slide stop, or it could be mag related.  I haven’t investigated it, nor do I plan too; at least until I have put a total of 400 rounds through the gun.

In fairness, following the 36 round malfunction fest, the remaining 14 rounds cycled and shot fine.  I ran two seven round mag dumps trying to get it to malfunction again.  This is obviously not a long-term test scenario, and I would have loved to continue, but there was a serious lightning storm moving in.  Here at Gun Nuts we go too great pains to avoid death by lightning strike. 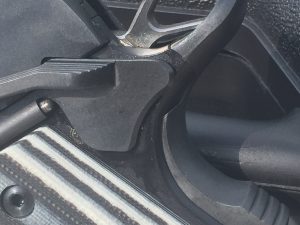 An annoyance that was discovered revolved around the safety.  It clicks off and on as a nice 1911 should, but it overhangs the frame ever so slightly.  I never noticed it prior to shooting the gun, but once I had some rounds down range the web of my hand started to blister.  I have seen this on many other 1911’s and it isn’t the end of the world; but at the same time, this is not a $500 RIA!  I expect better when dropping north of $1000 on a pistol!  If I keep the gun after the testing than I’ll correct the issue using my best home gunsmith skills.  Until then I’ll deal with it with either gloves or raw ignorance. 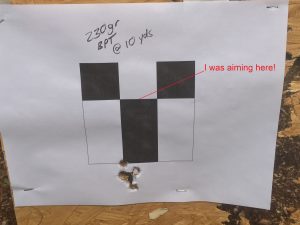 The final unexpected issue centered on the sights. (see what I did there)  I shot at 7, 10 and 15 yards and no matter the distance  the sights hit low – really low.  It grouped nicely though but at least 3 inches below my point-of-aim.  Given my statement above concerning 185 grain ammo being recommended for small 1911’s I find myself hoping DW installed sights regulated to lighter ammo.  I am looking for some 185 grain I can test this theory.

As expected the recoil was snappy, but not the end of the world.  You definitely want to have a good grip on the gun though.

With a little luck I can run some more ammo through it soon.  Will it continue to malfunction?  Will it eat my hand?  Will it hit POI/POA with 185 grain ammo?

Stay tuned as we find out.