Here is the fourth and final installment of Project Lumen.  I reviewed two lights this time and was able to draw some conclusions.  I am 100% glad I did this test and I highly encourage each reader to perform similar testing in your home.  It only takes 3-4 minutes each morning and you be rewarded with honest data, for your situation, which you can use to make better choices.  As I have said twice before, don’t fall into the trap of presumption.

This is the only flashlight tested that doubles as an assault weapon.  It could literally be used to bludgeon a person to death.  Once upon a time they were considered bright; that time has long passed.  A quick check of the Maglite website shows that they now make better LED versions – good for them.

Let’s be frank; nothing I am about to say about the Maglite will surprise you or be a revelation.  I chose this flashlight based both on its universal familiarity and universal obsolescence.  How am I sure it is obsolete?  Here is a true story proving the point.

The head the inspection department where I work owns a really, really old 2 D Cell Maglite.  He was having issues with it so he called up Maglite.  They actually told him it was obsolete and he should really consider an upgrade.

With the Maglite, I didn’t expect greatness, and my expectations were met.   When I first turned it on the night before the test, it was so dim I suspected the batteries were bad.  I broke out some brand new Energizer D cell batteries and was less than impressed when the light was still dim.  I swapped out the bulb with the spare in the tail cap – no joy.  These are the flashlights that time has forgotten.

At around 45 lumens the light output is similar to the Streamlight Microstream.  But unlike the other incandescent lights, the Maglite cast a nice pattern of light.  And with a Maglite you can adjust the focus, so there’s that.  The Maglite didn’t affect my night sight at all, it was serviceable and in use everything I wrote about the Microstream applied.  With one exception – you can always use the Maglite as a striking weapon, or a baseball bat. 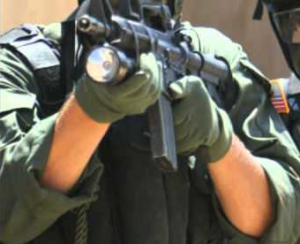 I shudder thinking about the early nineties when those on the cutting edge of military and police had to tape a heavy and dim Maglite to their weapon.  Hooray for technology!

The brightest of the flashlights I tested, this is also the one I poo-pooed in the review I wrote. 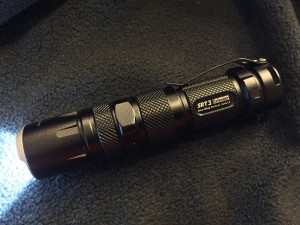 CREE XM-L2 LED, 550 lumens, and a properly designed reflector meant this light provided the best illumination of the test.  When regarding the light quality and effect, during this test…bravo.  Nevertheless, I continue to find the actual light itself to be underwhelming in design.

Similarly to the Streamlight PolyTac, which was the second brightest light I tested, at initial activation the brightness of the flashlight did affect my night sight briefly, although it was shorter period of time than I experienced with the PolyTac.  This test not being performed in a  controlled lab, this difference could have been due to a multitude of reasons: how deep I was sleeping, ambient light, where the light was pointing at initial activation.  As I noted before; when you are trying to identify someone inside of your house any delay is a negative.  But in this case I believe the good outweighs the bad.

As with the PolyTac, there were no weird shadows; just even light across the area of coverage.  It just worked.  If the flashlight itself was more reliable it would be my only choice.  I will start saving for a brighter Streamlight or SureFire.  Until the, the PolyTac is my light of choice.

I couldn’t get it.  Therefore it wasn’t tested.  Sorry.

Here is what this test has shown me, opened my eyes too and even shed some light on.  Man, that is a lot of light puns in one sentence.

In the end I had some fun doing this testing.  I learned quite a bit, both about my personal requirements and my environment.  While the expert stranger on the internet might disagree with me, I will sleep soundly knowing that I have actually tested my options and selected the best choice for me based on fact.  I recommend you do the same.