And this time they’re not content to shit up cheap surplus rifles like the Mosin Nagant, oh no now Archangel is coming for your beautiful, pristine Mausers.

You know, before I decided to write this post, I debated long and hard about whether or not it was worth it. You see, whenever I call out ProMag or Archangel for making crappy products, their marketing manager shows up in my comments and loses her shit. Last time she made up a whole bunch of shit that never happened, and to be honest it kind of got on my nerves. But one of the advantages of taking Gun Nuts fully independent (oh yeah, did I mention that we’re fully independent again? No strings on me) means that I can once again call a spade a spade. So let’s get on to it, because this is just awful. 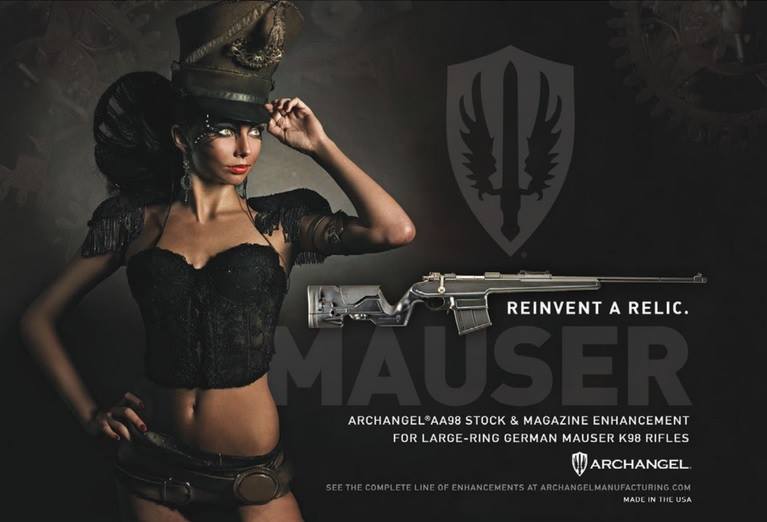 I mean, first let’s start with their advertising, which while oddly reminiscent of an EAA ad, lacks the sort of barking lunacy that makes the EAA ads fun. Instead you have an attractive girl in odd makeup with a hat that doesn’t really go with the product just sort of looking confused.

And then there’s the product itself. Because when I think quality, oh yeah, I think ProMag. Or Archangel. Oh wait no, I think the exact opposite of that. And believe me, if you thought I was opposed to slapping one of their crappy stocks on a Mosin, imagine how I’m going to feel about putting it on a K98? If you imagined “horrified” you’d be correct. Yes, I know there’s no permanent modification to the rifle, but that’s not the point. Mausers are special. They occupy a unique place in history, and that wood stock you’re thinking about ditching because it’s all dinged up? It earned those dings. Every single one of them. You don’t know where those scratches came from; sure they could be from the rifle being idly tossed in a crate, or maybe they’re from a German soldier, huddling in the freezing cold at Bastogne, wondering if those crazy Americans were going to start shooting again.

Rifles like that have history, and getting rid of their stocks is like taking their history away from them. It’s like buying a beautiful ’67 Camaro and then putting neon underbody lights on it. It probably wouldn’t be so bad if the stock was a well thought out, well made piece of gear. But we all know it’s not. And we all know who’s going to buy these things, and it’s universally going to be people who don’t get a hot crap about things like “history.” That’s just too bad.

In the end, I’m less offended by existence of this product than I probably should be. Yeah, it’s going to be a piece of dogshit, and yeah it’s a terrible replacement for a real stock. But what really offends me about this is the idea that you should simply throw away history and tradition, just because it’s got a few dings in it. To me? That’s more offensive than shitty advertising and garbage products combined.