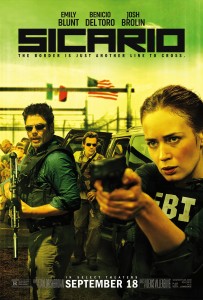 It seems that if Hollywood wants to tell a good war story anymore, they have to couch it in the form of the War on Drugs. The recent 13 Hours aside, most of the really good action movies you see these days focus on the growing conflict between America’s law enforcement agencies and the increasingly violent Mexican drug cartels.

2015’s excellent Sicario, starring Emily Blunt as FBI agent Kate Macer is no exception. Blunt’s character is thrown into an increasingly complex world of espionage and moral ambiguity after she’s recruited by CIA operative played by Josh Brolin. Brolin’s character spends the majority of the movie in the company of Alejandro, played by Benicio del Toro. As an aside, can you think of a war on drugs movie he hasn’t been in? I can’t. But it’s del Toro’s character that I first want to focus on, because he has the coolest guns. 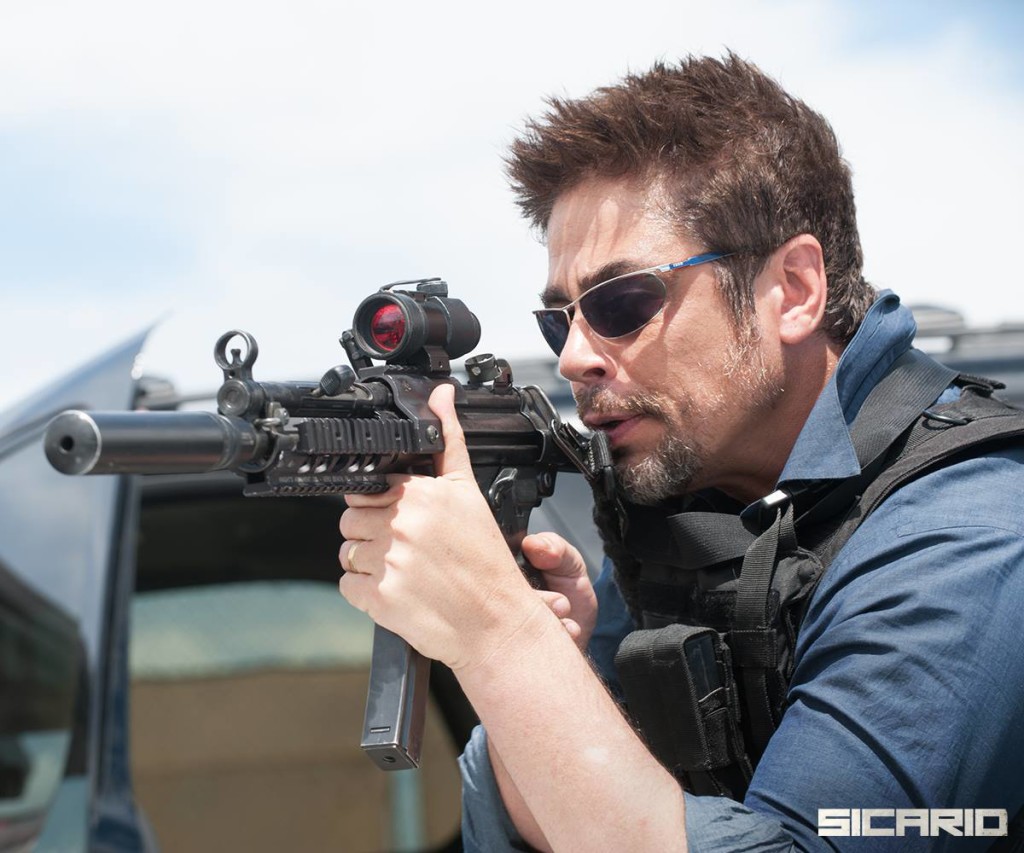 Del Toro’s character spends the majority of the movie rocking a suppressed MP5A3 that features railed handguards and an Aimpoint sight. In a movie surrounded by M4 carbines of various types, the idea of del Toro’s mysterious assassin/operative character rolling a 9mm sub-gun works well within the fabric of the movie and the character. Plus, as I’ve said it’s also unbelievably cool. Benicio finishes the film in a memorable moment with another iconic gun, this time a handgun. The climax of his part in the film concludes with his character sitting down at the dinner table, HK Mk23 in hand and suppressed. 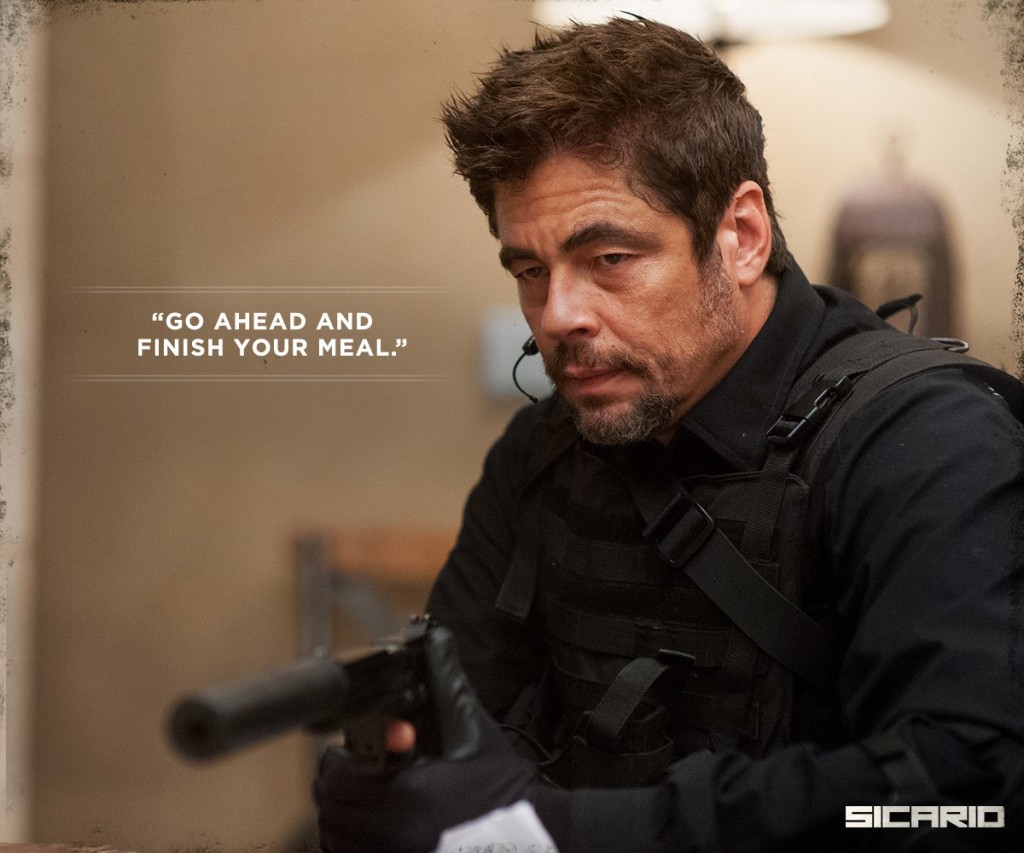 The Mk23 must sometimes endure being the butt of jokes by gun nuts, largely because of HK’s description of the pistol as being designed for “offensive” use. While it is large, heavy, and somewhat unwieldy, it is also superbly accurate, extremely reliable, and lends itself well to suppressed use. In the hands of del Toro’s assassin, it makes perfect sense.

Our heroine’s weapons tend towards the mundane, but also make perfect sense for an FBI agent to carry. During the initial raid, she’s carrying a vanilla M4 carbine, topped with an Eotech sight. As a side note, Eotech sights show up a lot in the movie, nearly every character save the Alejando and the Delta operators has one. For her sidearm, Blunt’s character carries a Glock 19. 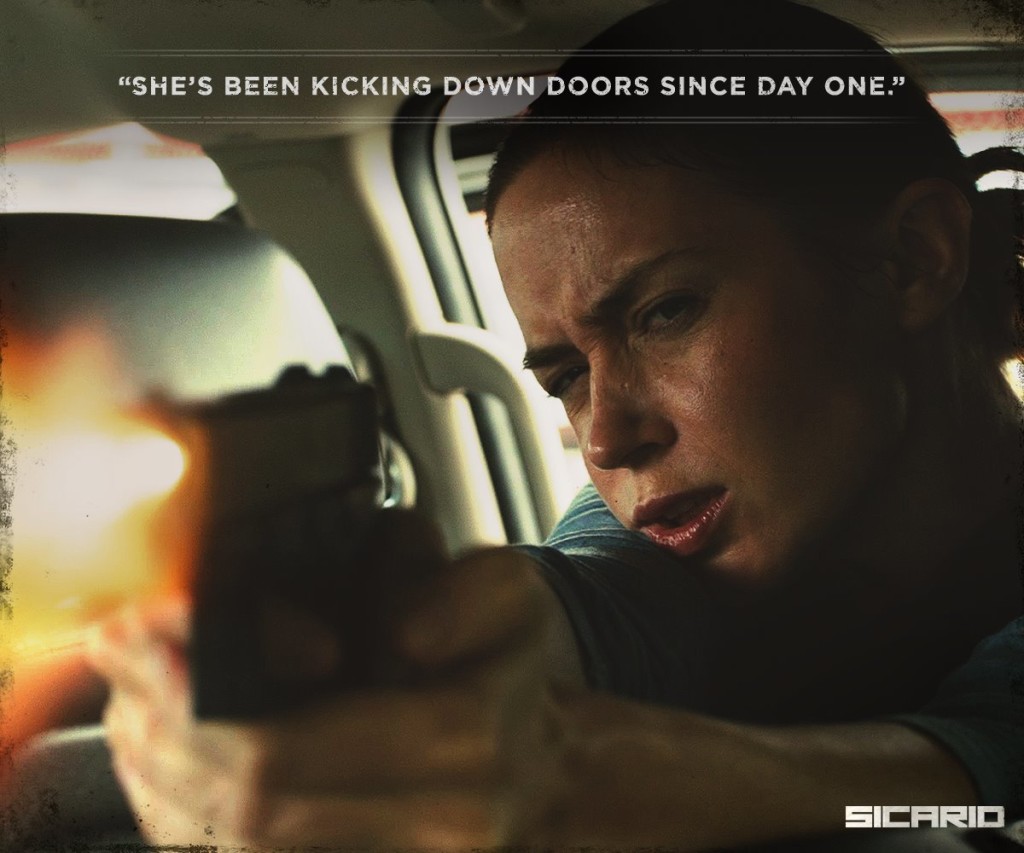 This is a bit of a continuity issue, as her character would more likely be carrying a Glock 23 instead of a 19. However, 9mm guns work better with blanks than larger calibers, so a Glock 19 it is. She uses this 19 with good effect in one of the film’s most interesting scenes, a “gunfight” of sorts in no-man’s land between the Mexican and American border checkpoints.

In an interesting choice, and not one I really agree with, the prop guys decided to outfit the Delta force characters with Airsoft guns, specifically an AEG M4 clone with Magpul MOE furniture on it. These are incredibly realistic replicas, and honestly if I’d not done my homework, I never would have known. If you want to get your own hyper-realistic airsoft rifle, they’re 700 bucks on Amazon.

That in and of itself is insane to me, because for $750 I could buy an actual AR. It wouldn’t be a good one, but I certainly could buy a real rifle. Crazy talk.

The last gun I want to mention is the M4 carried by Josh Brolin’s secret squirrel. It’s a Daniel Defense M4A1 model, and unfortunately you never really get a good look at it, or see Brolin use it to good effect in the film.

Like every other real M4 in the film, it’s sporting an EOTech HOLOgraphic Weapon Sight

It is however a taught, well-written and executed crime thriller. The gun handling is just fine, although it’s a little jarring in 2016 to see people still using the thumbs-locked Weaver stance, but I can give that a pass. If you liked Traffic, if you like well written, smart crime thrillers, I strongly encourage you to check out Sicario.