A million years ago, while the earth was still cooling, the California Highway Patrol made the decision to switch away from their .357 Magnum caliber revolvers to a modern semi-automatic pistol. In mid-1990, CHP officially selected the 4006 from Smith & Wesson as their duty, and 25 years later it’s still soldiering on in the holsters of over 7,500 sworn personnel. 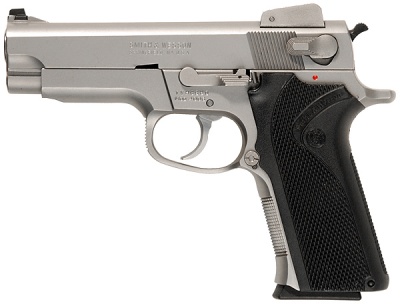 As recently as 2009, CHP authorized officers to switch over to the 4006 TSW variant, which incorporates a rail under the frame of the gun to mount a weapon-light. All of the 4006s feature fixed Novak night sights, a DA/SA trigger, and an 11+1 capacity. Smith & Wesson still manufactured new 4006s until as recently as 2011, presumably to support the CHP’s need for pistols. The last time I spoke with Smith about the CHP contract, back in 2012 they indicated that they also still produced small runs of parts to support CHP’s guns. 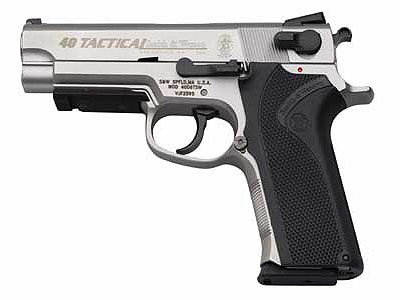 There are quite a few factors that have contributed to the 4006’s long service life with the California Highway Patrol. For me, I find the 4006 is one of very few pistols chambered in .40 S&W that I actually enjoy shooting. The all metal construction goes a long way towards mitigating the annoying recoil impulse associated with .40s in polymer pistols, and as a fan of the DA/SA system, I find that the triggers tend to “shoot in” very well. They are one of the most shootable .40s on the market, which is part of why I think CHP has stayed with them over the years.

They’re also incredibly durable and reliable. One of the reasons 3rd Gen S&W pistols are popular among a certain set of enthusiasts is because they’re built like friggin’ tanks. You can beat on these guns for days and they’ll just keep running along. In my experience with the 3rd Generation Smiths, they just work. That’s an excellent reason to stick with a duty gun, especially one that’s going to be exposed to climates that can vary as widely as California. One officer could have his gun exposed to salt spray from the ocean, another to mud and rocks in the mountains.

Lastly, I’d be remiss if I didn’t mention cost. California really doesn’t like to spend money at the state level on LE, and switching 7,500 cops over from one platform to another would involve an enormous expense, which would likely only be driven up by California’s noxious professional bureaucracy. Since that isn’t an expense they’re going to want to incur, it’s probably a good thing that the 4006 is an excellent pistol.

25 years of service with one agency is an impressive record, but the Smith & Wesson 4006 is an impressive pistol that has proven its worth time and again in the service of the nation’s largest state police agency. With it’s reliability and durability well established, we can expect to see the 4006 riding in CHP holsters for some time to come.