Here’s the first installment in the PT1911 torture test. If you want to sit through 22 minutes of me shooting a gun, feel free to watch the video, although it’s pretty stale. Some quick notes from the testing below the jump.

This test was a basic function test of the PT1911; I wanted to establish two baseline measurements. Accuracy, and out of the box reliability. Essentially, will it run and will it shoot groups. So to the first question, I took three different types of ammo, 100 rounds of Tula steel cased 115 grain 9mm, 100 rounds of Federal American Eagle 124 grain FMJ, and 50 rounds of Hornady 115 grain Critical Defense. I had four magazines, the two factory Taurus 9 round magazines and two 9 round Metalform mags that I literally scrounged out of the house. I think they were in shooter’s bags from Bianchi Cup.

Reliability: the gun ran fine. All four magazines, all 250 rounds went through the gun without a single issue. As has been discussed all over the place in the past, 9mm 1911s often struggle with reliability issues, but at least in the initial testing there were no problems with function with either FMJ or the Critical Defense bullet.

Accuracy: For whatever reason, I didn’t shoot traditional bench rest groups of the gun. Instead, I went with a more practical application of accuracy. Groups fired at a “timed fire” pace, about one shot every 4 seconds. At this pace at 20 yards the gun shot this group: 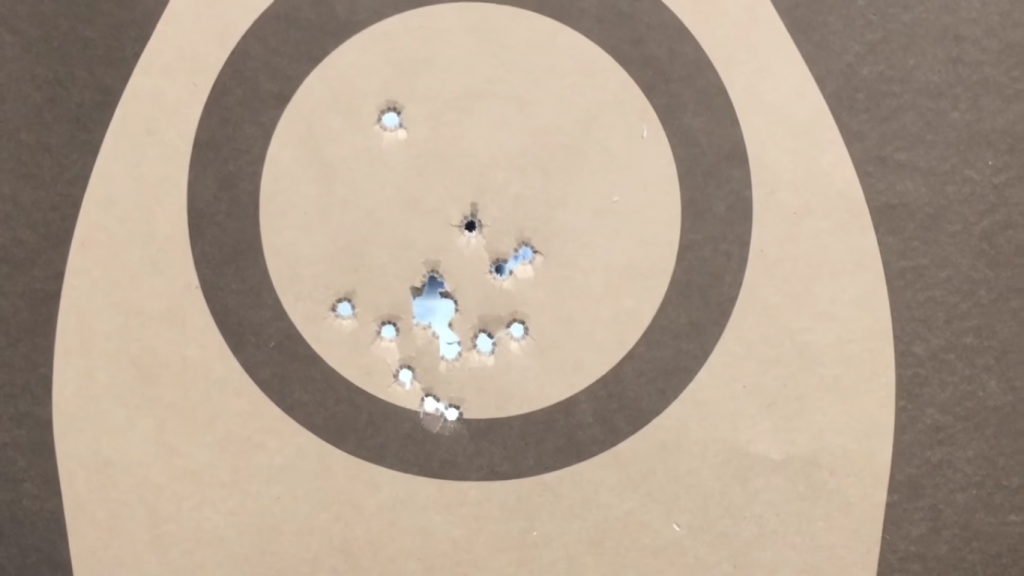 That’s about a 4 inch group if you toss out that one flier up top. That little guy? I wouldn’t worry about that little guy. One thing I did notice about the gun is that it shoots directly to the dot in the fiber optic, which is a little weird for me, since I normally sent my guns up to shoot to the tip (just the tip) of the front sight. However, all those shots would be 10s at Bianchi Cup, and they’d all have knocked the steel plates down.

Now let’s talk about issues, because there were some. First and foremost, the magazines. Both the Taurus and the Metalform magazines repeatedly refused to drop free of the gun, which really drove me nuts. When I press the magazine release, I expect that sucker to come out, not pop out an inch and then require some wiggling/pulling/shaking to get it the rest of the way out. Further on the topic of magazines, the factory Taurus magazines…aren’t great. I’m trying to be even handed here, but they were a pain in the ass to actually load up to 9 rounds, and would frequently nose-dive the first round to the point where I was surprised it fed. But it did.

Second issue: the rear sight set screw. It nearly backed completely out of the hole under sustained fire, the sort of sustained fire you’d expect to see at a class or during a USPSA match. While it was an easy fix to screw it back in (once I found an allen wrench), little things like that drive me nuts.

Lastly, the ejection pattern. Hilton Yam of 10-8 Performance is a big believer that a 1911’s ejection pattern is an early indicator of future problems to come; and has devised a 50 round test that will help diagnose problems. I plan on running the PT1911 through that test immediately, because the ejection pattern was rather erratic. The last case out of any magazine would frequently fly straight back in my face, which is…unpleasant.

However, the initial results are positive. Despite the issues with the rear sight and the magazines, the gun did function reliably for 250 rounds in first testing. I’ll run more tests and keep you updated as we go. In the hopes of rectifying the magazine situation, I also purchased three Wilson Combat 10 round ETMs, which are some of the best 9mm 1911 magazines on the planet. More to come!