Between August 2014 and May 2015 I put 4387 rounds through an XD 9 Tactical. That included a 3 day class (in the rain and mud) with Ben Stoeger that saw 1877 rounds without cleaning. With that in mind I thought I would offer my first hand experience an XD.  This is not so much a review as what I learned about the weapon with a sample size of one. 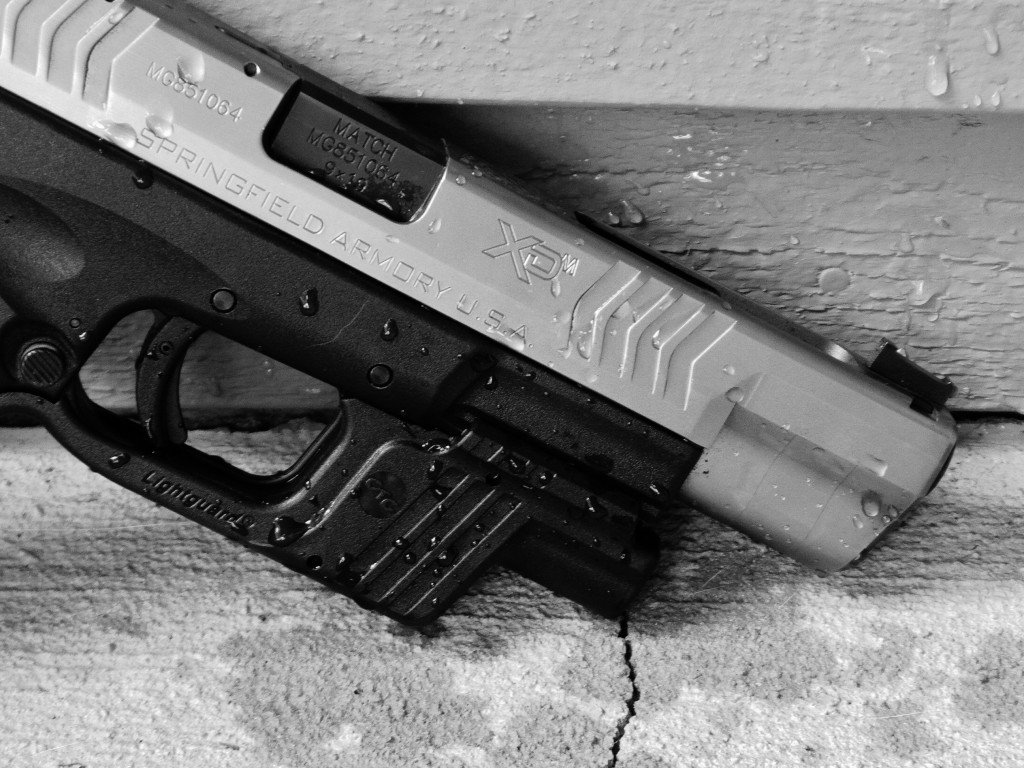 I know it is fun to bash them, but it was my competition gun during the time I owned it. Now I must be 100% honest; when I first decided to get into competition I bought a Glock 34 Gen 4 to shoot IDPA SSP.  Glock makes dependable, reasonably accurate guns, but I don’t shoot them well and I hate the trigger.  After 400 rounds, I sold it and went looking for something else. I was looking for a gun I could use for both games and for self-defense. In my mind I thought I would NEVER go full gamer. I was wrong, but we’ll get to that in a minute.

To be honest, prior to owning one, I never have given the XD’s much thought. I knew that many well-known tactical instructors poo-poo them, Caleb bashed them and they had the grip safety, which by all accounts would get me killed in the streets immediately. Nevertheless, I held one in a gun store, it felt good, pointed naturally and the trigger was serviceable. Springfield had one of their promotions going on so I got a voucher for 3 extra mags for FREE. That sweetened the pot enough that I lay down greenbacks and walked out the door.

I was the owner of a new XD Tactical in 9 mm; what had I done!

I did briefly consider a 4.5 inch XDm, but frankly the difference between the regular XD and the XDm didn’t justify the price difference, at least to me.

Now, as I said, my original goal was to keep it rather stock and usable as a defensive weapon, but, well… gamer. Before I sold it I had put way too much into it and modified it.

When it was all said and done, I had a decent gun to compete in SSP or Production and one I would no longer use for a self-defense scenario. Oh well, the best laid plans…

So, in my time owning an XD, what did I learn about the gun? Plenty!

Grip Safety – Let’s start with the apparent anti-tactical, instant Ninja death grip safety. I have heard stories of their failure. The 1911 has a grip safety and didn’t cause immediate disembowelment, so what was the catch? With a Level 3 Trauma ER standing ready I set out to see how it could fail. It didn’t take long to make it fail, once I learned its weakness. How do you make an XD grip safety fail? Three simple steps:

You may also notice the slide will not move either.  Since the grip safety must be depressed for the slide to move the gun is now completely locked up until the offending item is removed from the cavity. Now let’s be realistic. In a carry gun, the odds of this happening are EXTREMELY rare. Plausible? Yes, but still rare. For my purposes I decided this was a non-issue. If I was using this as my sidearm while storming the beaches of Endor trying to defeat a Mongol zombie uprising, then yes, I would choose something else.

Accuracy – It was decent, not the most accurate pistol I have ever shot, but it wasn’t bad. Not nearly as bad as some internet commando’s lead on. Maybe it shot bad because their accuracy isn’t as great as they tell people on the internet? But I digress. No problems here, plenty accurate for IDPA and USPSA.

Reliability – In a word, Great! I had zero malfunctions in the time I had it (aside for the grip safety experiment). Granted 4037 rounds isn’t a ton, but I would wager most people that have bad mouthed them have put less than that through them. For the most part I did perform proper maintenance and cleaned the gun every 500 rounds, aside from the class with Ben Stoeger. Again, I am not planning on being in a real life Twilight 2000 scenario, so a gun that can go 20K rounds without cleaning means nothing to me.

An Unexpected Positive – I sent an email to none other than Rob Leatham asking about the gun he used to win USPSA Production in 2006 and about Springfield’s XD accuracy work.  I expected a response but not the novel back. It was truly awesome that someone with his credentials would offer me such detailed assistance. For those that follow drag racing, it would be the same as Warren Johnson helping the local street racer tune his engine before a Friday Night Grudge Match. Frankly I found it bad ass and still do

Where there negatives? Yes.  Of course!

Now, for the crux of the issue.  Would I own another one?  Yes, but only if I got a smoking deal.

So why did I sell it? I needed to fund either a CZ Shadow or a Tanfoglio Limited Pro; as everyone knows they ship with a USPSA Grand Master card. In all seriousness, I wanted my competition pistol(s) to be all metal.  That was a move I am glad I made and a post for another day.

To summarize, If you own an XD, you can ignore the naysayers. If you are looking at one and the price is acceptable, buy with confidence. As I have noted before this is a sample of one, and my experience didn’t mirror the great many Chairborne Rangers of internetville; however, I wonder how many of those same naysayers have shot one beyond the bowling alley range, much less put near 4500 rounds through one.

As I have noted before; I deal in facts. If you have had failures with an XD (not XDS) please post in the comments with the approximate round count.