It’s fairly late, and I’m leaving a Chilli’s where I’ve been having dinner with some friends. It’s an area I’m not terribly familiar with and unfortunately the Eye of Sauron (aka Google) has not cast its gaze across the new construction recently finished in this area and as a result their maps app on my phone is giving some pretty bad directions. I finally sort out where I’m supposed to be going to hit the major thoroughfare that’s going to take me to the next major thoroughfare that actually gets me home when I notice that some jerk speeds up and gets right on my bumper. As in he’s so close his headlights are barely visible in my rear view mirror.

“I wonder what this dude’s malfunction is.” I say to myself. 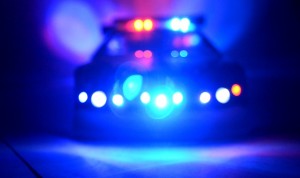 As soon as the last letter passed my lips, an amazing technicolor light show begins to emanate from the vehicle behind me. Ah. So that’s why he’s on my bumper. I haven’t quite memorized the headlight profile of Ford’s latest interceptor vehicles so it catches me completely off guard. My brain still expects a Crown Vic. I signal, pull over to the shoulder, and put on my hazards.

One of the most common questions I get from folks new to concealed carry is how a concealed carrier interacts with a police officer without triggering a shooting. Some may think that sounds a bit paranoid but any time there is an interaction between a police officer and an armed citizen there is at least the possibility (however remote) for tragedy. It’s been a while since I looked at the stats, but I believe that the traffic stop is still the most common setting for a police use of lethal force. The police officer has no idea who he is pulling over and what their intentions are. It could be a car full of nuns on their way to a prayer meeting. Or it could be this:

Most stops are pretty routine but the officer who assumes that the next stop will be routine sets himself up for disaster. To him, you are an unknown contact. If you had to interact with an unknown contact who happened to be armed, how cautious would you be?

The citizen on the other side of the blue lights knows very little about the officer as a human being, but we have the luxury of knowing that police officers in a proper uniform driving a proper police car are more than likely not pulling us over so they can rob us. Good guys do not have halos, but a police uniform in the United States is about as close as you can get to a reliable visual indicator of “good guy”. When we’re stopped, we know more about him than he does about us.

So let’s talk a bit about what you can expect during a traffic stop and some techniques that I use to try and put the officer at ease.

When I am pulled over, I do the following

Generally by this point in the stop the officer has figured out that even though I’m armed, I’m not a threat. So far I have never had an officer indicate any desire to actually disarm me during a stop. If it does happen, I’ll be nice and cooperative but I won’t touch my gun. If they want to disarm me, they’re going to have to do it.

The officer who stopped me after my trip to Chilli’s handled the stop well. He positioned his car to make maximum use of his spotlight. Between the light show from the various flashing lights on his cruiser and the almost painful number of lumens being put out by his spotlight, I couldn’t see a bloody thing until he was right on me. I only knew he was coming near the window when I heard his footsteps. He kept himself positioned so that I had to interact with him at an awkward angle. After I asked for permission to go to the glovebox and retrieve my registration, he followed my hand with his flashlight the whole way there and back. You should expect an officer to use these kind of procedures when they conduct a traffic stop because it gives them as much advantage as possible should they happen to pull over someone who means them harm.

After I handed over my registration, the officer asked me if I knew why I had been pulled over. I had just joined the highway and I hadn’t yet reached highway speed, so I knew I wasn’t speeding. I had absolutely no clue why he had pulled me over.

My car’s headlights have an “Auto” setting that is supposed to turn them on when the sensors on the car determine it is dark. The area I was in was so well lit that apparently the sensors didn’t see the need to turn the headlights on. I, being a dingus, didn’t double check.

“Often when we see someone driving without headlights…”

“They are inebriated.” I interrupted. The officer looked puzzled for a second. I’m guessing that the term “inebriated” isn’t often used with correct diction by people who are intoxicated. It’s late on a Saturday night and I’m driving without my headlights on. I can absolutely understand where he’s coming from.

“I’m not inebriated, sir. Just stupid.” I continued with a grin.

“So you’ve had nothing to drink tonight?”

“Nothing but iced tea.”

He checked my license to make sure I wasn’t a wanted man, then gave everything back to me and sent me on my way.

That leads me to the final element of what I do when I’m pulled over: Be nice.

I find that I get a lot farther with people when I don’t react to them out of pique even if I am not the least bit happy about the circumstances of our interaction. I don’t like getting pulled over. It’s always inconvenient and sometimes it’s damned expensive. Even so, being a jerk about things is not going to serve my interests. I’ve found that concealed carriers who are polite and show consideration for the officer’s position and situation often get verbal warnings instead of an actual citation.

If you haven’t developed a standard approach to being pulled over while carrying concealed, I humbly suggest adopting my strategy as outlined above. As a concealed carrier, your chances of being shot by the police during a traffic stop are pretty minimal, but it doesn’t hurt to adopt some simple practices designed to prevent any misunderstandings.