I want to make Gun Nuts ad free. Now, the easiest way to do that would be to just shut off the ads, but “Gun Nuts” isn’t just a blog, it’s a business that generates revenue and has costs associated with it, so I can’t just turn my revenue stream off. So I’ve set up a Go Fund Me page where you, the readers can donate to make Gun Nuts ad free for the next 5 years. 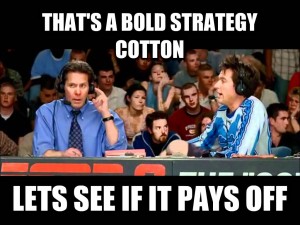 Now, if you’ve clicked the link you’ve seen how much money I’m asking for, $100,000 and you probably have questions. That’s fine, I have answers. The first question is probably “Why go ad free? Don’t you work in the advertising sales business?” As a matter of fact, I do, and that’s part of why I want to take the site ad free. Gun Nuts is part of the GunUp network, which is owned by Media Lodge. I work for Media Lodge. I sell ads on sites all across the network, but I’d be damn liar if I said that Gun Nuts wasn’t always first in my heart. And it always will be, and that’s what we like to refer to as “a conflict of interest.” Which means the best way to keep the site running for the next five years is to shut the ads down, and ask my readers for donations in order to keep things going. So that’s the big part of the why.

The second part of “why” is because I want the site to grow, but to do that we need money. Money to pay exisiting writers to produce more content, money to get more writers to do more content, and money to cover expenses for sending people to classes, events, etc. I want to take Gun Nuts to the next level, but I can’t do that without your support.

Thirdly, and most importantly, going ad free allows me the editorial freedom to really say what I believe on any given topic. I’ve had to reign myself in frequently ever since this became a business with advertisers, and that means I’m not giving the readers the best content I can. It’s difficult to tell you that Blastomatic XYZ sucks without losing my credibility when there’s an ad for it running in my sidebar, you know?

The last reason why I want to take the side ad free is simple: you. I’ve lost track of the number of times over the years that people have come up to me and thanked me for an article I wrote, a review I did, or a video I made. I’ve also lost track of the number of times people have told me I’m stupid, an idiot, and shouldn’t be allowed to have an opinion on anything ever. Both of those are important, because they tell me that people are passionate about what they’re reading here, and that’s all I’ve ever wanted to do. I want to give you, my readers, the best content I can, because you are passionate about it.

Now to the elephant in the room. $100,000 is a LOT of money. I get that. But it’s also enough money to fund the site for about 5 years, which is an extremely long time in blog years. But it’s also a realistic figure, because it works out to about 20k a year to run the site and grow it. I know that about 10,000 people will see this post today, and if each of them dropped 10 bucks in the hat, I’d be done. Ads would go away tomorrow (except for ones I’m contractually obligated to run) and we’d be wild and free. I don’t think that’s going to happen, but if it did it would be awesome.

Bottom line: this is about you. Nothing that I’ve done here at Gun Nuts would be possible without my awesome readers, who have taken this site from tiny little blogspot blog into a well read, well know, and maybe even a little bit respected site. But to get to the next level, I need your help. Let’s make Gun Nuts a better blog, and donate today.