In the original picture for the Rule One Gun Roundup you’ll note that the picture includes a gun I haven’t written a Roundup post on yet: My J S&W 638. I’ve written about my acquisition and modification of the 638 previously, but the circumstances that brought me to the Roundup presented an opportunity to consider the J in context with the competition. By this point I’ve tried most of the Rule One Gun options on the market, so why do I still find myself carrying the J frame so often? 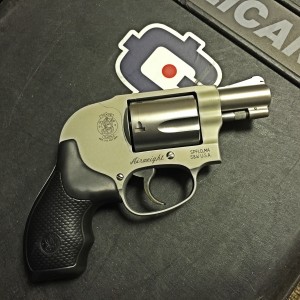 Power. The .38 special +P loaded with the right jacketed hollowpoint round gives terminal ballistic performance that none of the smaller calibers can hope to replicate. I’m personally fond of the Speer “BUG” load (Back Up Gun) with a 135 grain Gold Dot JHP, as it was developed specifically to meet FBI requirements from the J frame revolvers. While it’s possible to get .357 magnum J frames these days, I do not buy them. They tend to be considerably more expensive than the .38 revolvers rated for +P ammo. Stuffing actual .357 magnum ammunition in the little J frames just gives you a boat-load more recoil and blast without any significant increase in terminal effectiveness on the other end…and I can assure you that an airweight with .38 +P ammunition and concealment-friendly grips is already no picnic to shoot. Full .357 loads in a revolver as big as an N frame are pretty zippy…you do not want to try shooting them in a J frame sized revolver that weighs under a pound equipped with typically used concealment-friendly grips. If I found a .357 J at an attractive price with desirable features like significantly improved sights, I’d happily buy one but it would only be fired with .38 special ammunition.

The function of a double action revolver relies primarily upon your trigger finger. If your finger can pull the trigger, the cylinder will turn and the weapon will fire. Small semi-autos require enough clear space and grip for the slide to move freely for reliable function. I want to pause here and remind everyone how easy it is to stop the slide of a semi-auto from working:

While the demonstration was done with a Glock 17, smaller semi-autos are even more vulnerable to being choked than a reliable service pistol like the G17. One a typical range day this really doesn’t matter, but in a defensive scenario where you may be required to literally shoot someone off of you it can make a considerable difference. The J frame can be repeatedly fired through a pocket. It won’t go out of battery if pressed up against the anatomy of an assailant. If you’re fighting for control of the gun the cylinder will likely still turn if the person you’re fighting with isn’t able to apply sufficient pressure to the cylinder to prevent movement. These are all reasons why the J frame has been a popular backup gun in law enforcement for decades. I trained with an officer from a large metropolitan area who was attacked by a 300 pound former college football player turned drug dealer. During a traffic stop the guy literally picked the officer up and power-slammed him into the pavement.

It’s impossible for the English language to adequately convey just how much force you are dealing with from that type of assault. A hit like that can break ribs, collapse lungs, crack vertebrae, or kill outright. The officer was dazed and barely conscious, but he did realize that the violent felon was trying to get his sidearm out of his security holster. The officer took advantage of the bad guy’s tool fixation to draw the J frame he kept as a backup gun. He grabbed the guy by his hair and to borrow the officer’s exact phrasing “screwed the barrel into his head” and pulled the trigger multiple times, stopping the assault.

As I’ve written before, the J is probably the most difficult handgun on the market to shoot well and this, in my mind at least, is the primary strike against it. A very heavy trigger relative to the size of the gun and tiny sights does not make the gun easy to shoot well at speed. There’s no such thing as a free lunch: the things that make the J frame safe and convenient to carry also make it difficult to shoot well. The power (again relative to size) of the revolver makes it challenging and frankly fatiguing to perform serious live fire practice with, especially if you’re using an Airweight or lighter revolver.

To have any hope of using the little revolver effectively you will have to make a pretty serious commitment to train with it…but how? Thankfully there are still some folks out there like Claude Werner, The Tactical Professor, to give useful guidance on that. Claude has a couple of DVD’s that cover most of what you need to know to use a J frame effectively as a defensive implement that I would recommend to anyone who wants to learn more about the J frame. I have to depart from Claude’s advised practices on a few things (I use a different trigger finger placement than he advises because of the size of my hands, for example) but the discs are solid content that will steer you in the right direction.

Capacity is often mentioned as a limitation on the J frame, but in the context of other Rule One Guns the 5 shot capacity of the typical small revolver isn’t too bad. Just to give you a ballpark, the Glock 42 holds two more shots (6 in the magazine plus one in the chamber) than my 638. Reloads with the Glock are certainly easier for most, but none of the Rule One Guns are going to be reloaded at the speeds you see with the larger pistols like the Glock 19, S&W M&P, Sig, Beretta, etc. With the right equipment and some training, reloads of the J frame can be accomplished more quickly than you might think. I like the Safariland loaders for the J frame as I’ve found them to be a good blend of size, simplicity of use, and durability in daily carry. Claude’s DVDs cover other worthwhile options for carrying extra ammunition that might suit your needs better.

I find that the J frame is extremely easy to carry. It can be carried unobtrusively in a small holster just about anywhere on the waistline in perfect comfort, but is equally happy in a good pocket holster like the Desantis Nemesis. I’ve spent years carrying a J frame either as a backup or a low profile primary gun, and even though I have other Rule One Guns readily available I still find that I’m sliding the 638 in my pocket most days. Perhaps it’s just habit…do something long enough and you’ll keep doing it even if it doesn’t make sense. I’m by no means an expert marksman with a J frame even though I’ve trained with one quite a bit over the years. Nevertheless, I know I can use it well enough to get the hits I’m most likely to need.

It’s by no means my ideal handgun, and yet it fits a niche for me so nicely with a blend of desirable features that I don’t really feel any need to replace it. It is kind of weird to have so many issues with a gun and yet when it comes down to it to really like it so much.

I don’t really recommend the J frame to many people. There is a pretty steep learning curve involved in using the little revolver well and I don’t think most are willing to put in the work to really get the benefit out of the little revolver…but for those that do the J seems to develop quite a hold on them.