For reasons that are probably not entirely rational, I find that I’m extremely fond of my little Smith & Wesson 638. It’s become my little buddy…we’re going everywhere together these days. The other day I even packed it as my only firearm on a trip to the gym. If generic apocalyptic event had transpired on my way to, time in, or return from the gym I would certainly have been in quite a pickle armed with just a 5 shot J frame, but thankfully the world as we know it did not decide to end at an inconvenient time for me. Good job, world. Now about this ebola thing…

There are, of course, some things I’m not terribly fond of on my little 638. Chief among them is the sights. The J frame still uses the same sort of gutter-style sights that you could find on a S&W revolver manufactured before the turn of the last century. Seriously. Go over to The Arms Room and take a gander at this hand-ejector model manufactured in 1896 and note the similarity in the sights between that gun and my model 638 manufactured well over a century later. If anything, the sights on that old hand-ejector might be a skosh more high profile than the ones found on the modern J. 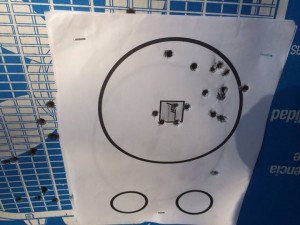 Under ideal conditions it’s possible to wring some surprising accuracy out of the sights as they sit on the revolver. While at a friend’s place function testing another gun some weeks ago, I pulled out the 638 and fired the first 5 rounds out of it. To my great delight, all 5 shots were essentially touching the 1″ square pictured to the right. A 1″ square is an exceptionally tiny target but I frequently use a target that small to work on accuracy fundamentals because it leaves zero room for error. (You can download another similarly useful target with a 1″ square here.)

As soon as the conditions aren’t ideal it becomes much more difficult to use the sights with that sort of precision. A few smiths out there will actually mill a J frame for more modern sights like small Novak sights or even these purpose built J frame sights from D&L. While there is a demand for such products and services, it doesn’t seem like it’s enough for someone to make a living doing just that modification. The cost is pretty high and the wait times can be substantial…and the service isn’t always available for the Airweight revolvers.

To improve the sights on my J, I used some old school trickery and some new age stuff: A Sharpie and some new grips from Crimson Trace.

One of the things you can do to improve the existing sights on a J frame is to add some contrast. I started using the brightest flourescent yellow paint I could find on black sights years ago to try and make at least the front sight easier to find in a hurry. On the 638 we already have a light colored front sight, so I added some contrast by blacking the rear sight notch out with a Sharpie. It’s not as good as a proper set of sights, but I find that it does help me get a quicker read on the sights. Enough so that I haven’t yet found the need to paint the front sight a loud color…the silver front seems to stand out plenty well on its own in combination with the blacked out rear.

The Sharpie/contrast trick does very little to aid you in low light. As it comes from the box, the little revolver is next to useless (from an accuracy perspective) in conditions of low light. You are limited to point shooting and hoping that’s good enough to get the job done. As I’ve mentioned in previous articles, I’m not a fan of relying exclusively on point shooting.

I’m generally a fan of Crimson Trace’s products but I think their offerings for the J frame and similar small handguns make the biggest difference in, for lack of a better term, “shootability.” I can make shots with a laser-equipped J frame that I would have absolutely no hope of making otherwise. Crimson Trace has a couple of different models for the J frame with each having their place. The LG-305 grips are fairly large and are ideal if you’re looking to make the tiny J frame grip more substantial. A larger grip on the J frame, believe it or not, often makes it easier to shoot. If you are belt carrying the little revolver then the larger grip might well be the best option for you.

I often carry the revolver in a pocket, so the 305’s are out. That leaves the LG-105 and LG-405. The 405’s have some really nice features and actually do make the little revolvers a bit more comfortable to shoot, but I’ve always gone with the LG-105 grips because A. they’re cheaper, and B. being made of hard plastic they’ve proven to withstand the abuse of daily carry extremely well.

It does add somewhere between $150-$185 bucks (depending on your luck in finding deals) to the cost of the revolver, but I think it’s still a bargain. You can literally put these grips on, adjust the laser to match your sights (if your revolver shoots as well as mine does!) and you’ve just made the little weapon much easier to hit with in most conditions…and let’s face facts: When you’re using a 5 shot .38 revolver with a sub 2″ barrel on it, hitting is of primary importance. Anything you can do to make hitting easier with a handgun like this is a wise investment because low capacity and on-the-bubble terminal ballistics performance makes getting the maximum effect from each shot that much more critical.