If you are a regular reader of this space, you may remember mention of the name Tom Givens from previous articles, but you probably don’t know a whole lot about Mr. Givens or why a guy like me would hold him in such high regard. Now I finally have the opportunity to tell you about the best defensive firearms instructor you have probably never heard of. 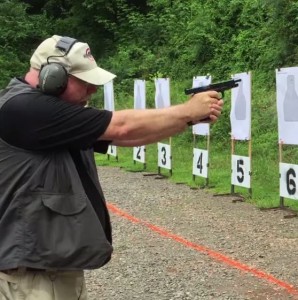 Listing Tom’s entire CV would take an entire article so I won’t attempt to do so. I’ll just hit the highlights. Tom put in a couple of decades as a police officer and investigator in one of the most dangerous cities in the United States. Tom is one of the original Gunsite instructors from way back in the infancy of modern firearms training, and was around for the founding of the IPSC and the IDPA. After leaving law enforcement Tom opened Rangemaster in Memphis, TN where he taught for more than 18 years. In that 18 plus years he taught tens of thousands of students…and so far almost seventy of Tom’s students have been involved in lethal confrontations with violent criminals after he trained them. Tom puts this in a very matter-of-fact perspective: The Rangemaster record is 60+ wins and three forfeits. So far every Rangemaster student who has had to drop the hammer on a bad guy has won the fight, and has done so without facing criminal or civil penalty after the fact. Of the shots his students have fired in a fight, 95% of them have found their mark. (You will have a devil of a time finding any law enforcement entity in the United States with that kind of accuracy in shootings) These numbers, of course, do not even contemplate how many students have managed to stop a violent criminal assault dead in its tracks without needing to pull the trigger on their sidearm.

The bulk of Tom’s students are not hardcore training junkies or former Special Forces supermen. They’re regular folks who lived in a dangerous place (a good many of them sought Tom’s instruction after having been the victim of a violent crime) and took the initiative to arm themselves and get some training. Tom took a bunch of ordinary people off the street and trained them well enough that they prevailed over hardened street criminals time and time again. A small Asian woman working behind the counter in a convenience store probably doesn’t look like much of a threat to most people. She certainly didn’t to the armed robber who busted through the front door with his gun already drawn. He was likely quite surprised when she followed her Rangemaster training and put a .38 caliber hollowpoint into his vital organs.

I didn’t learn about Tom because of some wildly popular DVDs or a signature pistol/carbine. He didn’t have a TV show or show up on the cover of gun magazines wearing the latest tactical gear. Hell, the man doesn’t even have his own action figure. I learned about Tom’s program because I encountered so many other instructors who spoke about his training (and the results it has produced) so highly.

Tom’s program does a masterful job of weaving together safe handling practices, fighting mindset, explanation of the function of violent criminals, marksmanship and manipulations, and demanding performance standards into a single course. Having been through the Intensive Pistol Skills course, it’s not a mystery to me why his students are so successful in self defense.

That’s representative of the kind of mindset information Tom communicates throughout the course. His program is so effective in part because he seems to get his students to buy in to the fact that the need to stop a violent criminal assault is not just a possibility, but is, in fact, almost an eventuality. He gets them to understand the sort of person who is committing violent crimes and effectively communicates that cooperation with violent criminals is not an effective survival strategy.

You may recall I mentioned three “forfeits” earlier. In these three tragic cases, the Rangemaster students were unarmed. They were completely cooperative and gave up their valuables as demanded by the armed criminal.

All three were executed anyway. The lesson there? Carry your damn gun.

Tom’s instructional style is very matter-of-fact…the kind of style that’s clearly the product of four and a half decades of education, research, and application. The presentation is tight and directly to the point. I’ve been in classes where hours were spent trying to explain the use of iron sights and proper trigger control. Tom was more effective in explaining it in just a couple of minutes:

The same goes with the reliability and lethality of handguns:

I’d bet you’re inclined to balk at the description of a handgun as a “pop gun”, but Tom never makes a statement like that without backing it up with fact. Earlier in the day Tom mentioned that one hospital in Memphis treated more than 3,100 gunshot wounds in a single year. Only 74 of those 3,100 plus GSWs were fatal, and the vast majority of victims were out of the hospital within 48 hours. Handguns, regardless of caliber, are not death rays. Practically any handgun you would consider for carry will just punch holes in things. To effectively stop a criminal assault it is up to you to ensure that you’re punching holes in something that matters.

Tom’s instruction emphasizes speed and accuracy from ready positions and from the holster. Criminal assaults tend to happen close and fast. Investigating many violent crimes and reviewing video footage of scores more led to Tom’s rule of threes: Three seconds. Three yards. In the majority of incidents the guns come out at extremely close range, and once they come out the thing is resolved one way or another in about three seconds. “In a fight, time runs like water. Misses waste time.” It was interesting watching Tom present what a lot of people would consider a pretty high level of shooting skill as something anyone should be able to do. “Hell, he’s only two car lengths away!” I’m convinced this is another key to Tom’s success…he doesn’t treat what he’s presenting like it’s climbing Everest. His presentation implies that anybody can get from the holster on target in less than 1.5 seconds. Anybody can fire two or three well-aimed shots in a second. His students rise to meet those expectations as they apply the lessons under his and Lynn’s capable supervision.

This was a phenomenal class and I cannot recommend training with Tom and Lynn highly enough. In a class like this you are getting a distillation of all the stuff that’s been proven to work from Cooper until now. It is pure essence of superior defensive pistolcraft…and it’s impossible to be exposed to it without walking away a much more dangerous foe for any criminal inclined to attack you.

Tom and Lynn are on the road full time these days, so odds are they are going to be in a class near you sometime in the near future. Get into it. Your odds of success at self defense will improve.