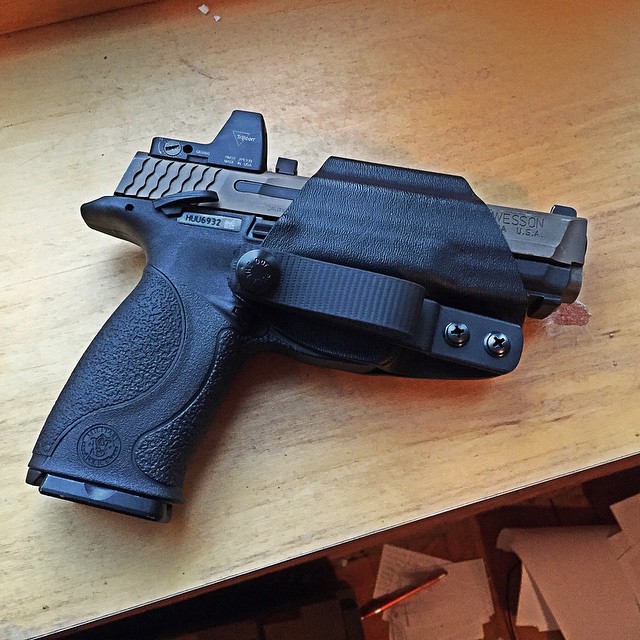 In October of last year, I wrote a post about why I’d ditched AIWB carry, the quick summary is “I couldn’t find the right holster/gun combo” to make it comfortable for long periods of time. I’ve periodically messed around with other combos and haven’t found a good fit. Until now.

The PHLster Skeleton that I’m wearing as a write this solves that problem via kydex sorcery. I’ll be honest, I was actually a little skeptical when Jon sent me the holster, because I’d had an early production Skeleton for the Shield that actually drew blood. However, I shouldn’t have worried, because the PHLster his own damn self has refined his kydex game to the point of high art, and this holster is now, in own words “comfortable as dicks.”

The primary “discomfort zone” on most kydex AIWB holsters for me is (if you’re looking at the picture above) the bottom right of the holster, where the clip attaches to the body of the holster. On a lot of holsters that area is squared off, because square edges are cheaper and easier to do. On the Skeleton, it’s nice and curved, which means no razor sharp kydex point jamming into my big meaty thighs. If you’ve ever worn a kydex holster that has the square edge, you know the pain of which I speak today.

Retention is great, the gun snicks in with a nice positive click, and requires affirmative effort to draw it, without being too grippy. The lack of a sweat guard means that re-holster, especially at the AIWB position is an action that I undertake with considerable care and deliberation, and is also why you see this gun equipped with a thumb safety and factory trigger. Also, the holster accepts any size M&P (other than the Shield, of course) so if I wanted to AIWB 5 inch CORE/Pro Series I could, or if I wanted more concealment I could roll and M&P Compact up in here.

The one drawback is that like many AIWB holsters, the butt-tuck isn’t as great as it could be. I will probably add a bit of a wedge to the body of this holster to push the butt in line with my body a little bit. Alternately, I could lose 10 pounds and likely solve that problem as well. The butt of the gun printing can also be solved with thoughtful attention to my concealment choices, or simply by carrying an M&P Compact instead of the full size.

Bottom line? This is the first true AIWB holster that I’ve actually enjoyed wearing, and have been carrying in it for about a week with no complaints. If you want one, go get one here: http://www.phlster.com/#!product/prd1/924401054/skeleton