Before I get this post going, I want to make something clear. I really wanted to like this gun. The idea of a medium framed revolver chambered in .38 Special at an affordable price is really appealing to me. So I bought this Taurus with my own money to see if it would work in that role. Right off the bat, there were problems. The innards were rough, and the mainspring strut was actually bent. So, those problems got fixed. Nothing drastic, just straightened the mainspring, and gently buffed the bearing surfaces to remove any high spots that would cause an uneven trigger pull. That was part 2. After that minor work, yesterday I took the revolver to the range.

The range protocol was simple: accuracy testing, than endurance testing. For accuracy testing I’d fire multiple six shot groups using three loads that have proven to be incredibly accurate performers with other revolvers, and get the results. These would be fired at 25 yards, standing unsupported. First up was Federal 148 grain full Wadcutter, from our friends at Lucky Gunner. Contrary to my usual practice, I fired all these groups single action, because the 15 pound DA trigger on the Taurus was just proving to be a real problem (more on that later). 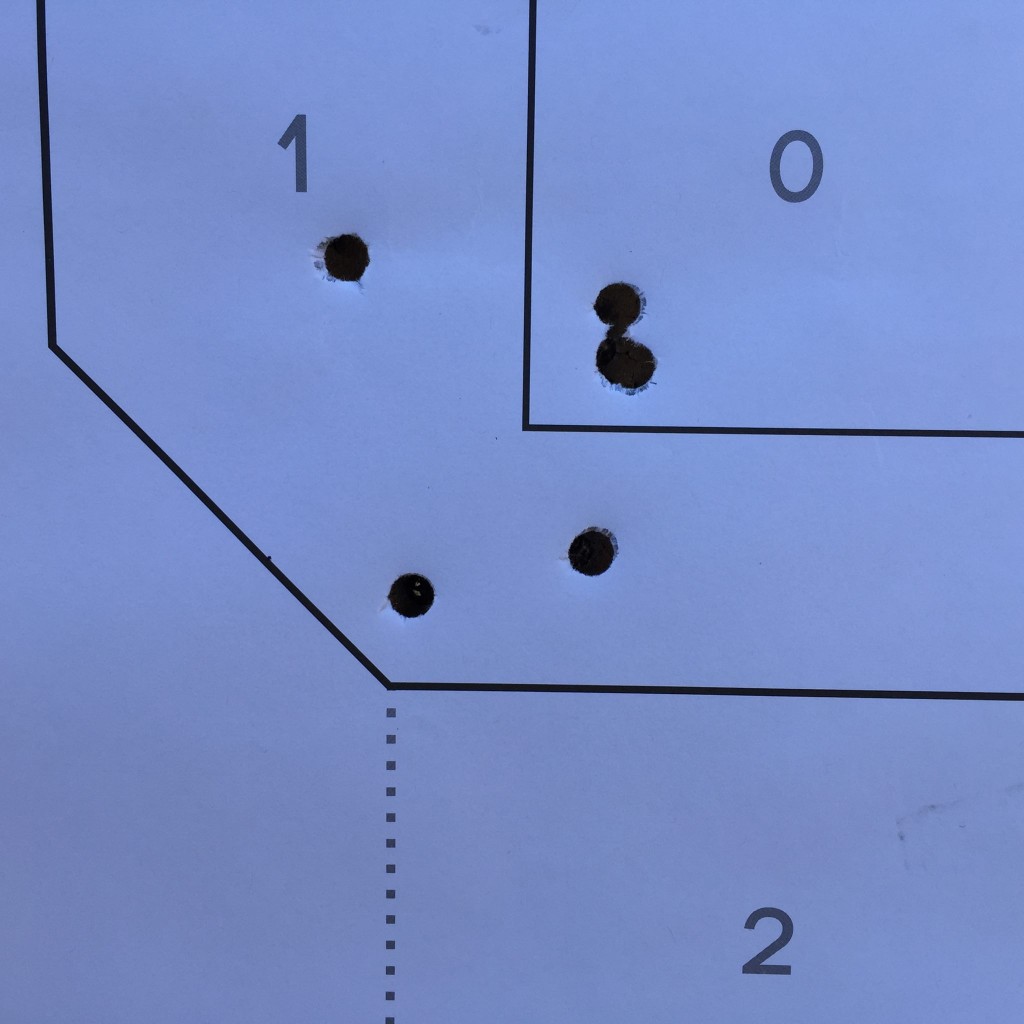 The first group gave me hope. The Federal WC is a famously accurate load, and out of the Taurus is shot under 3 inches, coming in at 2.78 to be exact. Up next I paired a Brazilian gun with some Brazilian ammo, specifically Magtech 158 grain LSWC. 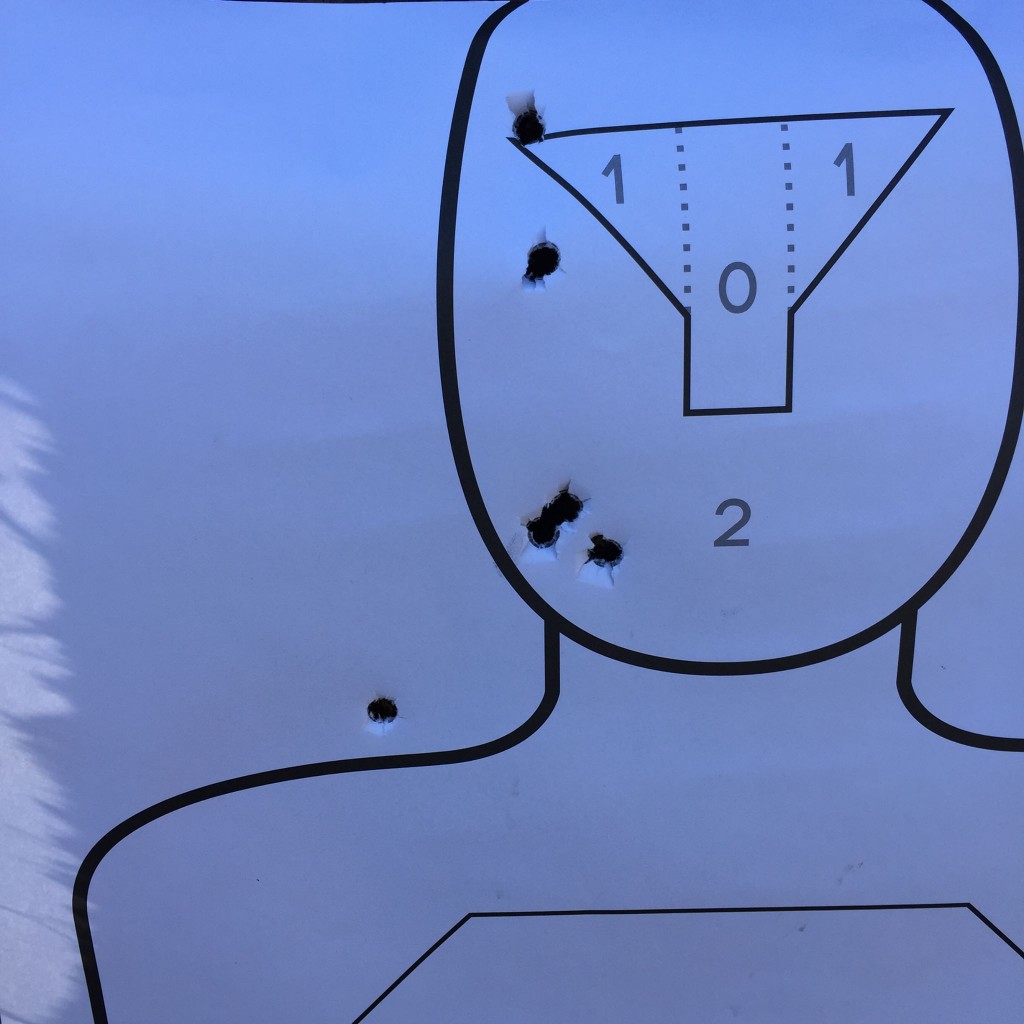 That was disappointing to say the least, coming in at 6.34 inches. For comparison, the same load shot 2.94 inches out of a 2 inch barrel Ruger SP101. The last load was one of my favorite Special loadings, DoubleTap’s epic 158 grain LSWC at 1000 FPS. If you ever need to shoot clean through…stuff, this is the .38 load for you. 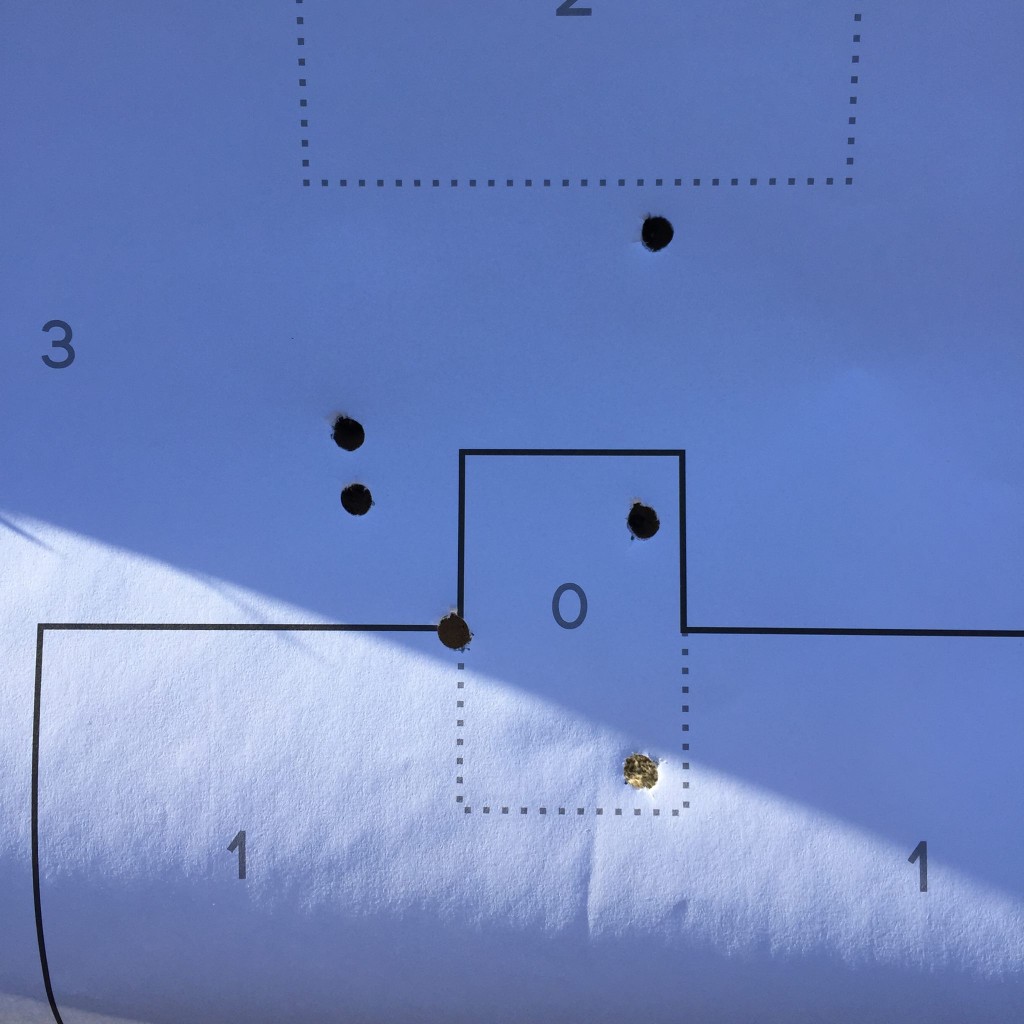 At 6.12 inches, this load was disappointing. Again, we’ll compare it to the same load out of a small snub gun, the SP101 fired this into a 3.043 inch group. 50% smaller from a gun that is considered much harder to shoot well.

On the accuracy front, the Taurus was disappointing; 6 inches with ammo that’s generally considered very accurate using the SA trigger is just not good. I also noticed that rounds impacting consistently to the left of the sights relative to the target, the fix for something like this on a gutter sight wheelgun is to open up the rear notch on the right sight to adjust the point of impact. That would require the use of tools that I’m not comfortable applying to the gun, because whenever you have to remove metal, you’re getting into the danger zone of ruining things.

After the accuracy test, I performed one of my favorite revolver tests: the endurance test. This may seem silly and a waste of ammo, and to a certain extent it is. However, revolvers are more likely to have problems when the get hot than they are for a single cylinder of cool ammo. The endurance test is simple: line up at least 6 boxes of 50 rounds of ammo in the trays so you can access the bullets. Shoot the gun as fast as you can, and then reload by twos out of the trays, repeating until you’re done. I used 420 rounds of ammo for this (because it was what I had left). When I was done, my support hand thumb was black from lead and powder, my trigger finger was exhausted, but I was having fun.

The reason I like this test for wheelguns is because it will expose any issues the gun might have with cylinder binding under heavy use, binding from lead fouling, etc. If a gun makes it through this test, it’s generally good to go on a durability standpoint. To its credit, the Taurus made it through the durability testing just fine, digesting over 400 consecutive rounds of the dirtiest lead ammo I could find, everything from 158 gr LRN to the aforementioned DoubleTap trainwreckers; even some Hornady Critical Defense and Federal 130 grain FMJ mixed in for good measure. However, it wasn’t all smiles and giggles, because the endurance test exposed a serious problem. 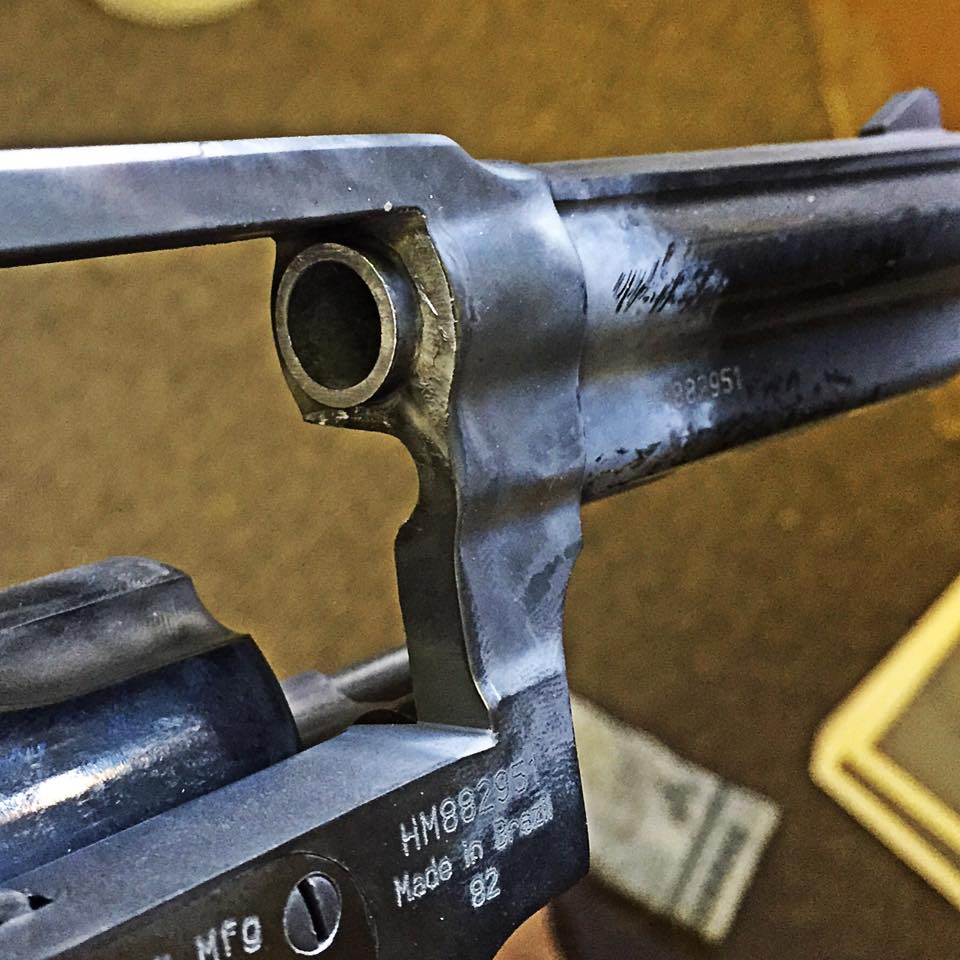 That’s the right side of the gun after the test; the silver discoloration you see that spreads out in an arc from the forcing cone is lead. Here’s the left side of the gun, notice that it’s lacking similar spray patterns: 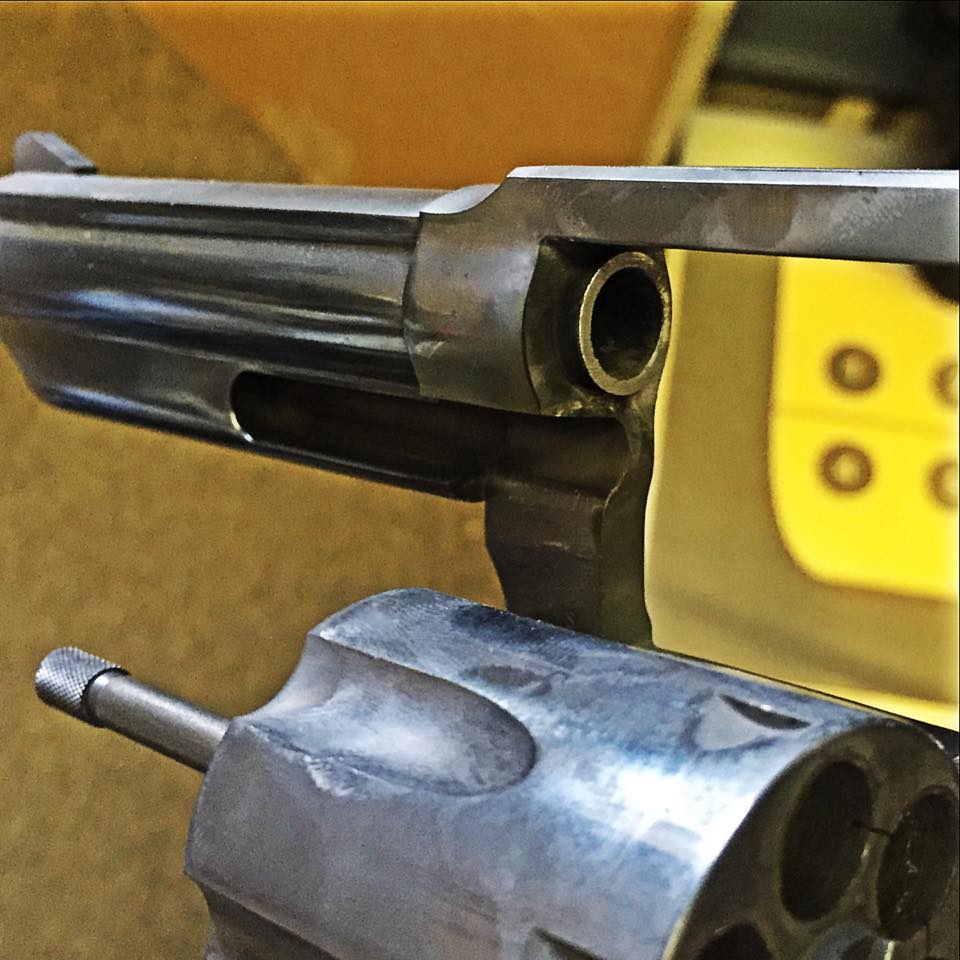 What this tells me about the gun is that it’s out of time. One or more of the cylinders isn’t lining up correctly with the forcing cone, so as the round travels the cylinder it’s hitting the right side of the forcing cone and shaving itself off a little bit as it enters the barrel. That is the job of the forcing cone mind you – to make sure rounds enter the barrel properly, and this cone is technically doing that job. However, what you should see is a relatively even distribution of fouling around the forcing cone, indicating that the revolver is properly timed and the rounds are striking roughly centered on the cone. This revolver, as you can see, has rounds striking the right side of the cone, with little to no indications of fouling on the left side of the gun.

So the final verdict on the Taurus 82? Yes, I know that this is just a sample of one, but even this sample of one has been deeply problematic. Coming from the factory with a bent mainspring strut and internals that looked like they’d been finished with a flint axe was bad enough; but those are things that can be fixed at the armorer level. The fact that a brand new revolver that’s never been shot was completely out of time to the point where I’d consider it dangerous to keep using it? That is a problem, and it’s a problem that can’t be fixed by the average gun owner.

The question now is “what to do” with the gun? I will probably send it back to Taurus, although because there’s documented evidence that I’ve had the sideplate off, that will likely void the warranty. I might keep it around the office as a grim reminder to my other revolvers to not misbehave. What do you think I should do?