I’ll get right to the point. Battle: Los Angeles is a great movie. Not because it’s well written or well directed, but because it’s 100% honest about itself. It’s also a far better war movie than The Hurt Locker or Zero Dark Thirty. While we’re on that topic, can someone tell me why we keep letting Kathryn Bigelow direct war movies? The Hurt Locker sucked, and Zero Dark Thirty Sucked. Sure, Point Break was epic and amazing, but that was 23 years ago.

But back to Battle: LA. It’s great. According to my friends from the Marines, it manages to be just the right amount of moto, not too much and not moto enough, but right on point. Aaron Eckhart nails the crusty Marine sergeant, and the rest of the characters are pretty well done, right down to the inexperienced butter bar who manages to HTFU and make a decent end of himself. Sure, Michelle Rodriguez shows up playing the same character she always plays, and no they don’t let women work as 1C4X1 in the Air Force, but we can skip over that. 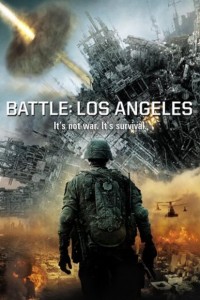 Here’s the basic premise of Battle: LA. Aliens attack earth, and a platoon of Marines needs to help evacuate survivors. It promises you one thing: aliens fighting Marines. It delivers. It also delivers the best rifle to pistol transition I’ve ever seen in a movie during the pretty sweet final battle scene between the embattled Marines and the bugs. The movie has all right notes, it’s fun, there are explosions, gunfights, and solid action. But what’s really great about the movie is how it’s actually a sneaky throwback to the moto war movies of the 40s and 50s.

It’s not cool in Hollywood to make war movies that show American servicemen and women kicking ass and taking names. The last movie I can think of about the American military kicking ass is Black Hawk Down, and even that’s fairly ambiguous. The Kingdom would qualify, but the protagonists are FBI agents, not US troops. To put it plainly, Hollywood doesn’t like to make movies about Americans winning wars. They like moral ambiguity and Jeremy Renner crying in the shower. So if you want to make an unapologetic pro-Murica Moto War Movie, you have to make the bad guys aliens. Because they can’t be Islamic extremists, someone might get offended. We even pulled the Chinese out of the miserable Red Dawn reboot, and replaced them with the extremely unlikely North Koreans.

Battle: Los Angeles does it right though. They do get rid of the human villains in favor of faceless communist bugs, but the movie itself is exactly what I describe above. Pro-Murica Moto Shoot Badguys in the face. Sometimes when you’re sitting on a plane flying cross country, you don’t want to watch a serious film reflecting on the horrors of war. Sometimes you just want to watch America kick some ass. If you do, pick up Battle: Los Angeles on one of the various streaming services. Don’t believe me? Let Terminal Lance convince you.