I’ve often used this space to take a dig at mainstream media types who report on gun issues and use of force related issues. I don’t make fun of them simply for sport. I think it is crucial that we take the time to document and catalogue the breathtaking ignorance that the media often displays on even the simplest matters related to firearms because it helps to show that they are not, in fact, smarter or more enlightened than everyone else. Media types often love to portray themselves as such and honestly believe it because they’re usually in a room with other people who went to all the “right” schools and hold all the “right opinions”. In these comfortable dens of groupthink they are rarely troubled by discordant information.

The events in Missouri give yet another example of the depth of ignorance you can find in most of the media: 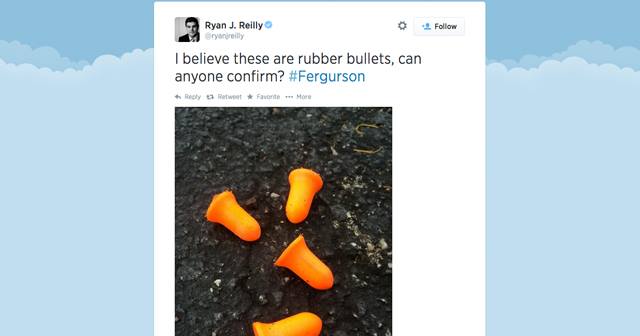 Yes, ladies and gentleman…that’s a reporter who doesn’t know the difference between rubber bullets and foam earplugs. It’s highly likely this reporter has never done anything that would actually have required him to use foam earplugs…and that’s the point. The smartly dressed people you see on television who present themselves as intelligent professionals discussing matters of great import are often people who have such laughably little knowledge and practical experience with the topic they are “covering” it crosses the line from funny to almost painful.

Human beings are limited creatures. We only have so much time and so many resources that can be invested into learning about various subjects. To achieve anything approaching real mastery of a field of study that touches on the lives of billions usually requires a lifetime of study and research. A top neurologist is the result of a lifetime of study, research, and practical experience in the field. He/she has such depth in this field of knowledge that to effectively communicate to others they have to dramatically simplify concepts they spent years learning just so that the audience has a hope of grasping the point. It’s impressive…but outside of that field of expertise even the top level neurologist quickly finds themselves out of their depth in a discussion of, say, mechanical engineering best practices. Or forestry harvest limits.

I assure you that the typical journalist has nowhere near the level of learning you find in a top neurologist. In any field. They are very quickly out of their depth on practically any topic that the news covers ranging from a bridge collapse to, as in this case, a riot. I’d be out of my depth attempting to cover the intricacies of a mechanical engineering disaster, too…but I also don’t appear on television asking who is to blame or pushing policy proposals that I claim will fix the problem. You don’t often see that reticence in the national media.

In the aftermath of Newtown on MSNBC’s morning show Emily Miller managed to make most of the panel look pretty foolish…and with no disrespect intended toward Ms. Miller, she has barely dipped her big toe in the water of guns and firearms policy. If we put somebody like Tam on that panel she’d have had the Morning Joe crew in the corner sucking their thumbs. It would be like watching a turkey shoot because the people in the tailored suits and too-deliberately-nerdy square glasses don’t have the faintest idea what in blue hell they are talking about. Through hubris they assume that having gone to the “right” schools, learned all the “right” opinions, and hanging out with all the “right” people that they have all the knowledge they will ever need, especially when it comes to guns. The dearth of relevant knowledge is so bad that somebody who knows which end of the tube the bullet comes out of can pretty much own the conversation because they are so obviously better informed.

Use examples of this ignorance on your social media outlets. Engage in the conversations about these issues bringing these things to the table. You will never reform most of the media figures, but you can nicely demonstrate to the reasonable people out there who are inclined to believe the people with the manufactured smiles on TV that their sources for news are really just a gaping maw of limitless ignorance. Institutions (and individuals) who can’t tell the difference between bullets and earplugs, or who don’t know what a barrel shroud is, should be treated with healthy skepticism…not believed as if they were dispensing the Gospel.