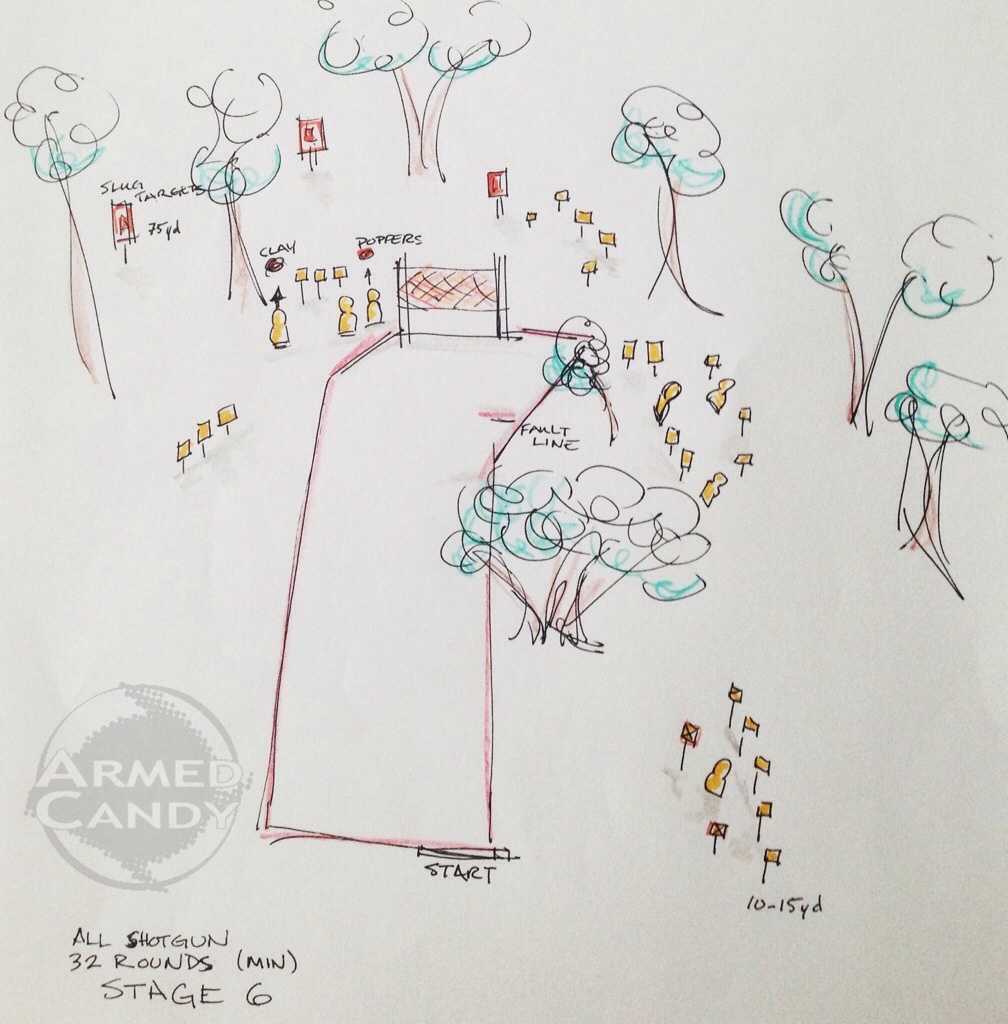 For the past few months I have been amazed at how much I am enjoying the shotgun portion of my 3gun training. While it’s easier to hit a target it’s takes more brute force to control than a pistol or rifle. Yet even with my pathetic excuse for upper body strength, I really like this new challenge. This was the mindset I had as I approached a 32 round shotgun stage at the Freedom Munitions Memorial Match in Clinton, South Carolina.

I have drawn up the stage, as I recall it, but my memory and drawing may not be precise recreations. A 25+ yard path ran straight from the starting point to a barricade. Along the right side of the path, steel targets say atop rebar spikes, with a few “no shoot” steels mixed in. I planned to start with these then move down the path to a small grouping of larger steel plates. In the distance behind these were two large gongs that were meant to be shot with slugs. The plan was, shoot as much shot as it took to handle all the small targets up to this point, then load four slugs, and use them on the two gongs. As we did our walk through, coach Janna Reeves, made a point of explaining that I should not use the slugs for anything but the far gongs. I knew this was important and made a point of going over the concept in my head repeatedly. “Use ALL four slugs before going on to the birdshot targets,” I told myself. 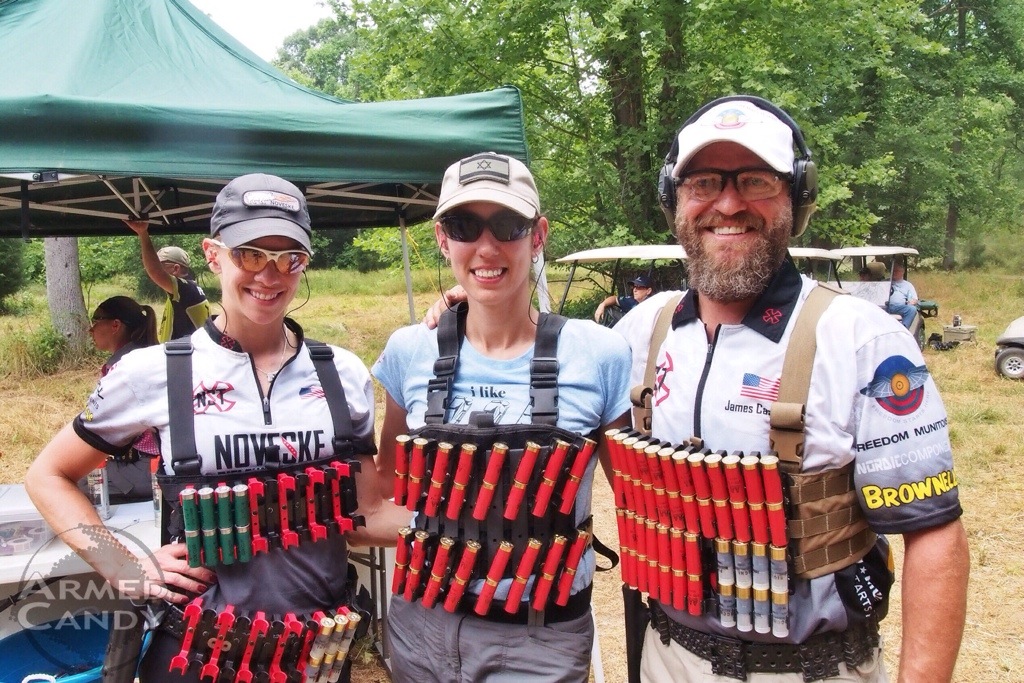 Once I had gotten through this part of the stage I would have to contend with a ton of steel and two poppers that would throw clays. My clay hitting percentage was not espectially good, so I figured my best bet was to make sure my tube was full before hitting the throwing poppers. I was wearing a 10 shell Carbon Arms carrier on my belt, which I filled with the slugs. The Carbon Arms chest rig I wore was covered with shot shells. I organized my shells this way so that I would know exactly what I was reaching for at any given moment. The chest rig had been properly fit to my body, but I had not had a chance to practice with it. It didn’t get in the way of my shooting, but pulling shells from it was a slightly different experience.

As I said last week, they called me up to shoot the stage and I was not totally ready. This actually helped me because it showed the RO that he had to switch gears and deal with me as a beginner. I put my toes on the mark as directed and held my shotgun at port arms. The buzzer went off and I raised the gun to my shoulder as I switched off my safety.
“Get in the box!” I heard from behind me. Thank goodness the RO had broken from the usual protocol and given me that pointer! This kind of rookie mistake would have ment a match DQ and one very sad Gabby. I did as I was told, and then began shooting. Nothing was connecting! I went to town unloading my mag tube at the first grouping of targets and still let a number of them on their stands. As I reloaded and moved to the group of three steel plates on the left I filled the tube with shot only. It took four or five shells for me to hit these and then I went for my slugs. I loaded my four slugs and took aim at the far gong. I believe I hit one of the two gongs and when I had counted four shots I went back to the smaller closer plates.

The first plate in this grouping went down beautifully. I used up what was left in my gun trying to connect with the rest. I saved the poppers with clays for last so they could be attacked after a full reload. Again I blasted away with very little impacts. I moved on to the targets on the right, past the tree. Again, I pathetically blasted away. I felt Janna walk up along side me during my last reload (the reset team was on my heels) and I knew I didn’t have much time left. Rushing I flipped the gun over harder than usual, in order to load the shells and the heel of my left palm touched the barrel. WOW that stings! And the burn left a mark too.

Finally, mercifully, the RO called “time”. I slumped, tired and defeated. With an empty chamber I looked down at four shells on my chest rig. How could I have gone through over 40 rounds? Then I heard, “Can I see your gun?” And there stood Jerry Miculek. I happily handed it over, (partially because I was mad at it) because I was ready to soak up whatever pearl of wisdom came next. Mr. Miculek reached down my CZ712 Practical to the AR15 style collapsable stock, squeezed the release leaver and extended the stock. The one thing I’d forgotten to do before I stepped to the starting line. I wanted to crawl into a hole and disappear. It was an embarrassing “rookie” mistake, maybe more embarrassing than dropping my pistol mag on the very first stage and my very first draw. Though, similarly, one I’m not likely to repeat in the near future.