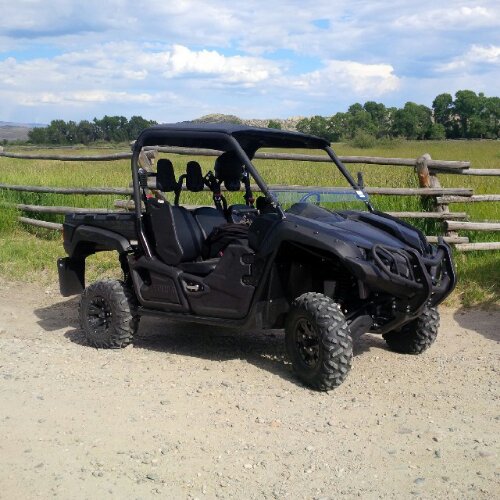 That is the Yamaha Viking SE Tactical. It’s a UTV, which I learned this week stands for “Utility task vehicle.” Other phrases for this class of vehicle are “side-by-side” referencing that the drive and passenger sit…side by side. The class of vehicle has evolved from a farm/working vehicle into a capable off-roader, ready to handle all kinds of terrain. I spent two days in Yamaha’s Viking UTV, the tactical version above and the six seat version below. 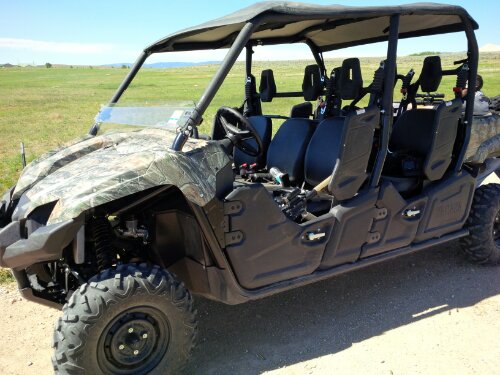 Generally speaking, it’s not legal to operate a UTV on a paved road. That wasn’t a problem for us, because we used the Yamaha vehicles to bump around the back country on single-track trails. Doing this turned into a game of prairie dog whackamole. We’d drive down a track, spot some dogs, blast one or two from the vehicles, then bail and set up more stable shooting positions and then really do some work. The Vikings handled all the terrain we threw at them with no issues. Everything from deep sand to thigh high water (it was thigh high on me, so probably ankle high on a normal sized person), muddy fields, no problems.

What’s the perfect companion for a tactical off-road vehicle? A Modern Sporting Rifle, of course. 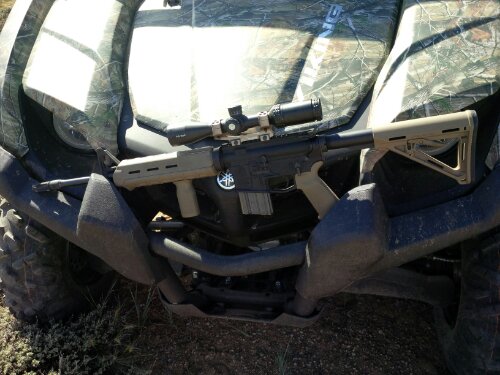 I spent the most productive days of the trip with a Smith & Wesson M&P15 MOE wearing a Bushnell AR223. With up to 9x magnification, you could see and shoot dogs up to 300 yards, and contrary to what the internet may have told you, a 16 inch AR is capable of reaching out that far with accuracy. Despite how most people train, an AR is not a big, long, shoulder fired pistol and can be shot past 25 or even 50 yards.

But back to the gun itself: the MOE rifle ran just fine in the desert, despite being coated in a fine layer of dust and bouncing around next to my leg in the Viking. The scope held zero despite some rough treatment, and the prairie dogs? Well, the prairie dogs died.

If you’ve never been prairie dog hunting, it’s fun like nothing else. It’s not even really hunting, it’s more like target practice on extremely reactive targets. But that’s what makes it fun. Prairie dogs are wretched vermin: they carry the actual black plague, cattle break their legs in prairie dog holes, they destroy crops and generally just the worst sorts of things. So when you blast one with a Hornady V-Max and watch it’s body come apart, you don’t feel bad. 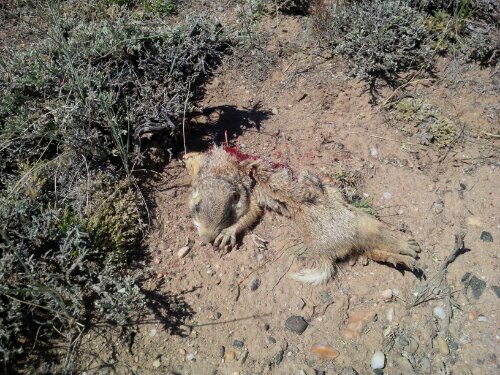 In fact, you should feel pretty good. You’re doing a public service, killing zombies. I saw a prairie dog that been shot multiple times with a .22 trying to drag itself towards the rat car, probably to attempt to bite us and turn us into zombies. I’ve also seen prairie dogs eat their own dead.

Of course, the real moral of the story is that hunting prairie dogs is a hell of a lot of a lot of fun. Blasting when you put ARs and badass UTVs in the mix, it turns into the most fun I’ve had with a gun in my hands since I learned how to shoot.