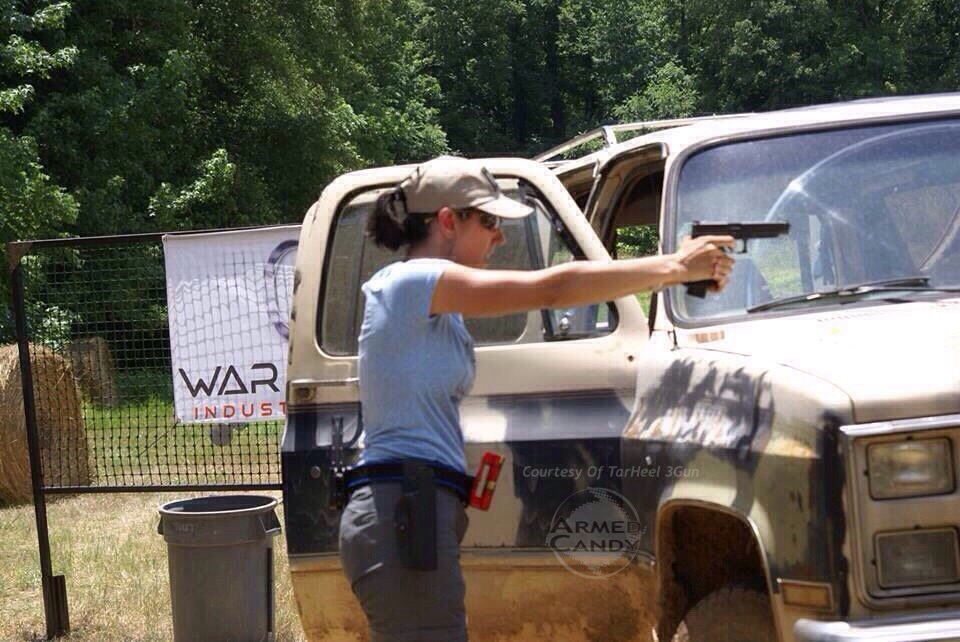 Though I have been practicing in my coaches’ backyard range, which includes an abandoned horse barn, a chicken coop and a rusty horse walker, the first stage I encountered at the Freedom Munitions Memorial match at Clinton Plantation was more complicated than any I had ever tried. It began with a pistol draw from the belt and shots at a dueling tree from behind the hood of an old suburban. The pistol dump bucket was in the back seat of the vehicle and my shotgun was staged in the front seat. Once I complete a few pistol shots from behind the truck, I will grab my shotgun and clear a steel spinning star with birdshot, load slugs and shoot distant steel gongs. Upon finishing the shotgun portion of the stage, I should run to a ladder and climb to the bed of a large truck on which my rifle has been staged (and has been soaking up the noon sun). Lastly, I should engage six steel gongs at a distance of between 200 and 350 yards.

I walked the stage with my coaches and decided on a solid plan. Then we watched a few people shoot, and we changed the plan. I was second to last in the shooting order so I did my best to watch and learn. I watched my coaches and a number of my heroes run this stage and for the most part, no one made it look like a smooth well-rehearsed ballet. The pros dealt with malfunctions and struggled with the long-range shots just as I figured I would, so I wasn’t especially nervous when my turn arrived.

I’ve known, since I began learning and practicing 3 gun with a pair from the Noveske shooting team, that I should not hold myself to the same performance standards as my coaches. This is much easier to do since I am not a competitive person by nature. Keeping in mind that I am completely out of my league made it easier to focus on only the task at hand. As I stood and watched the rest of the squad take their turns, I noticed how few people truly paid attention as others shot. I knew that even less attention would be paid to me since I could not be considered one of their competition. This thought further alleviated any stress I was feeling.

I will say, there was one moment when I felt butterflies in my stomach. As we drove to the match that morning, the two and a half hour drive gave me time to consider my interest in competitive shooting. I had started this learning process to become a more informed gun writer. In the process I had gained two wonderful new friends and access to a wealth of people and information. Shooting practice is some of my favorite time in my week. They push me a little, and I push myself, I’ve learned a ton, but up until that morning, it had been nothing but fun. By signing up for the Freedom Munitions Memorial match, I had taken the next step. I wondered if this step would remove the fun. That was the thought creating butterflies in my stomach.

When I was called to the shooters box I made it clear to the RO that I was a beginner and he should explain things clearly and not expect me to just know. He was minorly accommodating, telling me where to put my foot before he told me to make ready. As I loaded my pistol and chambered a round I reminded myself not to break the 180 degree rule. This was one of my biggest concerns: to be disqualified for unsafe actions. However, I forgot to remind myself to avoid bumping the new large magazine release I had recently installed on my pistol, as I re-holstered.

The buzzer went off. I drew my pistol and heard my full magazine hit the ground. I reloaded and kept going. I went for my shotgun and used up nine rounds of birdshot on the star. I had shot one of these stars one other time with a pistol, but I was worried about attempting it with my shotgun. Fortunately, my coaches advice about how to take on such a target held true and again I cleared all but one plate on the star. Now I loaded slugs into my shotgun. I could almost hear my coaches’ thoughts behind me “Slugs are for distant gongs. Don’t take the last plate on the star with those slugs!” I found out later that they really were thinking this, but fortunately I got it right. I have no idea how many slugs hit the targets or how many pistol shots missed the paper, but as I dumped my shotgun I had a moment of, “Did I do everything I was supposed to do here? What was I supposed to do next?” And then I took off running for the ladder and the truck. 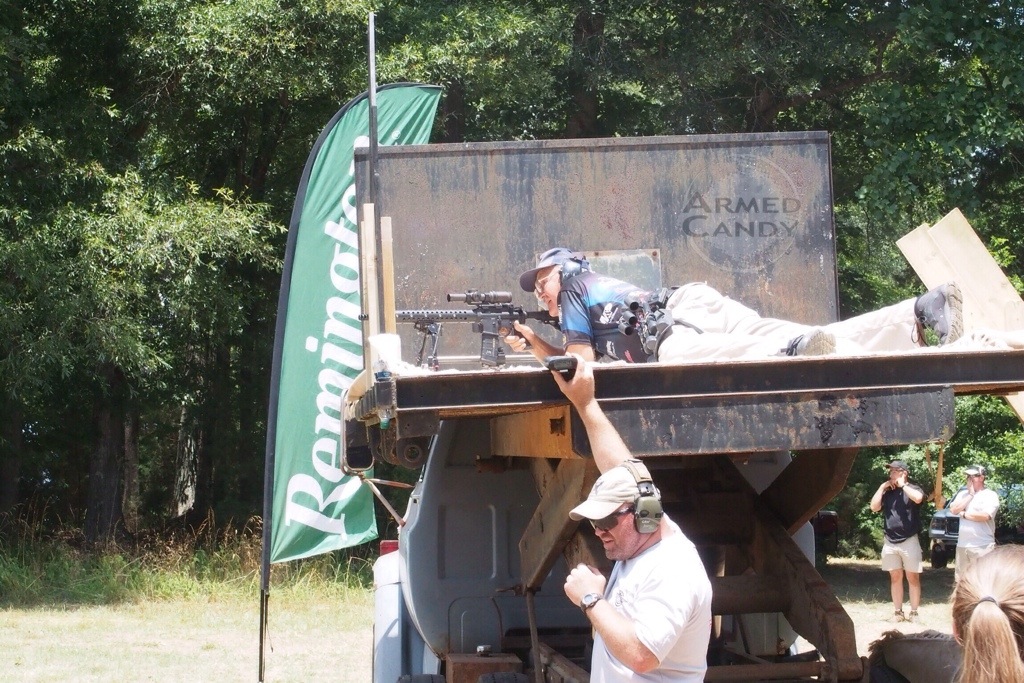 Six, plus or minus 300 yard shots, that I had only attempted for the first time two days earlier lay between me and the end of this fiasco. I remembered to switch off my safety before I began to line up my shot. However, when I “made ready” my AR I had not fully seated the first round “DOH!” Once fixed I took on the steel, and I believe I hit a few of them. I came down the ladder acutely aware that a 4moa red dot is not made for long range shots. Sure, shooting in the division “Tactical Irons” doesn’t give me a lot of options when it comes to optics, but I’m sure cross hairs would serve me better.

I have no idea what my time was for this first stage, but I assure you I was the slowest in my squad. At least I didn’t time out. As I put my guns away I heard a man’s voice say something about my slugs. It was Jerry and Kay Miculek and I lost all ability to speak or think. From what I recollect they told me my slugs seemed hot (and painful). It was true, I was shooting 1540 fps slugs from X-treme Bullets rather than low-recoil, because I’d run out of time to find a softer option. I honestly don’t remember feeling any recoil while on the clock. They also commented on how my stock didn’t seem to make the situation any easier. This too, I knew I had to rectify. Then the asked a bit more about my CZ 712 Practical and I composed myself enough to start forming sentences.

And that was only the first stage! I’ve got so much more to share from my first 3 gun match! It might seem as though my entrance into 3 gun competition has been a bit drawn-out, but I assure you, I am only attempting to share as much of the details and lessons as I can.