HOUSTON, Texas – With seven division stage wins and the second fastest overall time, Comp-Tac Victory Gear‘s Gordon Carrell took the Enhanced Service Pistol division title this past weekend at the Carolina Cup IDPA Championship. This marks the fourth time in the past seven years Carrell has won a division title.

Held in Oxford, N.C., the Carolina Cup drew 331 top IDPA shooters including 89 competing in the ESP division where Carrell finished with a final time of 208.58, more than 34 seconds faster than his nearest competitor. 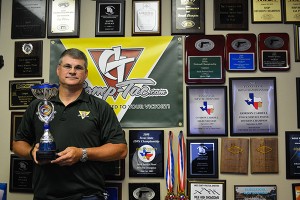 “The Carolina Cup is one of IDPA’s most challenging matches and always draws a number of the country’s best shooters. It’s gratifying to come out of such a difficult match, against a very competitive field, with the title win,” said Carrell, who in addition to competing for Team Comp-Tac is the General Manager at Comp-Tac Victory Gear.

Also representing Comp-Tac in the match was fellow Comp-Tac team shooter Randi Rogers who placed fourth Master and fifth in the Stock Service Pistol division finishing with a final time of 248.75 seconds.