Yesterday was my first day actually open carrying a gun around real people. I took the dog for a walk in the park, like I do every day. But today it was different, because my mind was screaming at me the whole time “WHAT ARE YOU DOING, YOU’RE CARRYING A GUN OUT IN THE OPEN WHERE GOD AND EVERYONE CAN SEE IT THIS IS WEIRD.” Contrary to popular belief, I am not so desperate for attention as to want negative attention, which is what I sure I would attract. Of course, nothing of the sort happened, and anyone that did look at me was looking at the dog anyway, because let’s face it the dog is awesome. 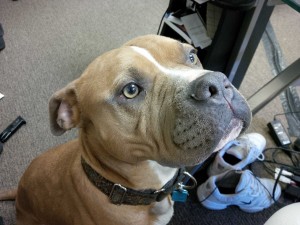 I’ve been carrying a concealed firearm for over a decade now. I’m sure that when I first started, it might have felt unusual, but I can’t honestly ever recall it feeling like that. Open carry on the other hand feels weird because no matter which way you slice it, you are doing something that is not a common practice, and you’re doing it in such a way that anyone who is casually observant can notice.

The other thing I found myself doing was mentally rehearsing what I’d say to the police if they did stop me; and in that I realized I have a couple of goals for any encounter with the police while open carrying:

Of course, I didn’t encounter the police, and basically no one noticed.

The only other thing of note that I did after yesterday was change my gear. I switched Galco M4 holster for a Safariland ALS, also for a 1911. The ALS paddle is a lot more comfortable for all day wear than the Galco’s paddle, which is narrow and can dig into the hip after a few hours. In comparison, the Safariland wears much better and distributes the load of a full size pistol a lot more evenly. Tomorrow I’ll have another update, which I hope will be as boring as this one.