This week, we’re going to take a look at the business side of the shooting sports for a while. In this we’ll look at membership trends, championship growth, media coverage, sponsorship dollars, the way each of the major sanctioning bodies are organized and operated, as well various other decisions and actions off the range that will affect shooters directly. We will cover the “practical” shooting sports only, focusing on IDPA, USPSA/IPSC/Steel Challenge, 3-Gun, and in a double feature on Friday NRA Action Pistol and ICORE. Today the series opens with a look at general trends in the shooting sports. 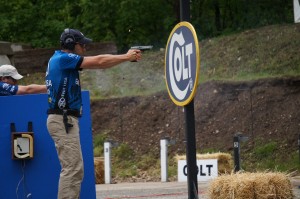 Generally speaking, the news is good. Discussions with shooters across the country indicate that regardless of discipline, match participation at the club level is up. This is pretty directly connected to general increase we’ve seen in gun purchases and ownership over the last few years, as plenty of shooters bought all these cool guns during the crisis and are now seeking something more to do with them. Also adding to the club level increase is the easier availability of components and ammunition. While things still aren’t as great as they were pre-2008 in terms of ammo availability, you can actually walk into a store and buy 9mm practice ammo. That’s a good thing.

At the national level in the sports, participation in various discipline’s major national championships, with the exception of Steel Challenge World Shoot is up as well. The “big matches” like Bianchi Cup, USPSA Nationals, and IDPA Nationals have seen steady growth and are showing no signs of slowing down. A major success for USPSA has been the back-to-back Classic Nationals, which puts the once barren Revolver Nationals immediately after Single Stack Nationals. Prior to the format change, Revolver Nationals would see at best 30 shooters. The new format has grown participation to over 100 shooters, shooting the match in a single day. IDPA’s twin National Championships continue to be a success, with Indoor Nationals consistently selling out within minutes of opening. In 2013, IDPA added an additional National-level match, the BUG Championship. This was the surprise hit of the year, with shooters who attended the match providing excellent feedback on future matches.

Also of interest has been the rise of 3Gun Nation as the king of the heap in the 3Gun circuit. This year, 3GN added their regional matches, and eliminated use of the great “outlaw” 3-Gun matches as sanctioned 3GN events. Their regional matches and pro-series matches have been huge successes, and at the same time have not appeared to diminish participation in the classic outlaw matches either.

Across the board, sponsor participation is up as well. There are more jerseys, logos, and dollars flowing around major matches and even down to the club level than when I started back in 2006, and that’s a good thing. Because the shooting sports are hugely, critically dependent on both sponsor dollars and volunteers to make the matches happen, a sudden loss in major brand participation would be devastating at the national level. However, there are no signs of this happening any time in the immediate future, barring a major political event. While the allocation of money and resources may have shifted, the participation trends at national and club levels are still strong.

Everything is not perfect though, as the shooting sports in general face a couple of major problems. The first issue is that the current level of participation growth and sport expansion isn’t sustainable. People’s time and company’s money are both finite resources, and eventually a tipping point will be reached where both become too exhausted to support additional shooters. When that happens, there will be a contraction at the national level and the club level, as shooters will find other things to do with their time and companies other things to do with their money. This is part of the cycle of the sports to a certain extent, and is coupled with national trends in gun ownership as well.

Perhaps a more pressing concern is this: an aging volunteer population. Volunteers are absolutely the heart of the shooting sports. You can have all the Presidents and Boards of Directors and CEOs of Shooting Integration you want, but without dedicated volunteers at the club level, there will be no matches. While the shooting sports in general have been successful at attracting new, younger shooters, that trend has not always translated into those younger shooters becoming volunteers at the club level. Again, people’s time is a finite resource, and the demands of being an RO or Match Director at a club are competing directly with time that could be spent playing Wolfenstein, driving cars, or having drinks with friends. Of course, the problem could simply be an age one, and as the younger shooters grow older in the sport, the idea of working as a volunteer will become more attractive. Time will tell.

The last major challenge faced by the shooting sports is the real question of how to adapt to a changing culture. Not just gun culture, but culture in general. Gun owners now weren’t introduced to guns by their parents, there is much more of an emphasis on cool-guy gear and appearance oriented products that there was even as little as 10 years ago. The Red Bull and X-Games generation is now in their 30s and 40s, and the Millennials are out there, buying guns, and then writing poetry about their vegan peace bicycles. Times have changed, and the shooting sports must adapt to stay relevant.

As we go through the individual sports this week, we’ll look at how each of the sports has changed, grown, and what successes they’ve had. We’ll also address the issues of membership growth and churn, stagnation, and how each of the sports has responded or could respond to some of the challenges that are presented in this post. It is a great time to be in the shooting sports, and there are tremendous opportunities here for all shooters, regardless of discipline.