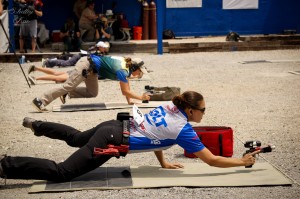 We’ve been talking about Bianchi Cup a lot, and that’s because we love the match. If I could shoot one match a year, it would probably be Bianchi Cup.

Here are ten reasons why it’s so awesome:

The Mover, which is frequently the last stage shot by the top-tier shooters, is an emotional event. It is also a ton of fun to shoot, and for many practical pistol shooters it is one of their best stages of the match.

There is nothing like the “plink” of steel, and the Plates event give shooters that. This is the best spectator event, as you can watch the steel fall (or not) and see the shooter’s reactions.

For some, difficulty is everything, and the Bianchi Cup certainly offers that. The Practical event requires shooters to take 50 yard shots at the little Bianchi Cup “X-ring,” getting a perfect score here isn’t easy.

The range staff is polite, professional, and incredibly helpful. You shouldn’t feel intimidated if it’s your first time shooting the match, because they are here to help.

All the cool people show up for Bianchi Cup. Which means seeing old friends, making new ones, and watching some amazing shooters duel it out.

So many “Championship” matches feel like over-hyped over-priced club matches. You won’t get that here. This is a championship, and everything about the set up lets you know it is.