Yesterday we had a wee bit of Christmas come early at the Gun Nuts office. My 11 inch AR pistol upper showed up, along with my pistol buffer tube and SB15 Arm Brace. Here’s the result: 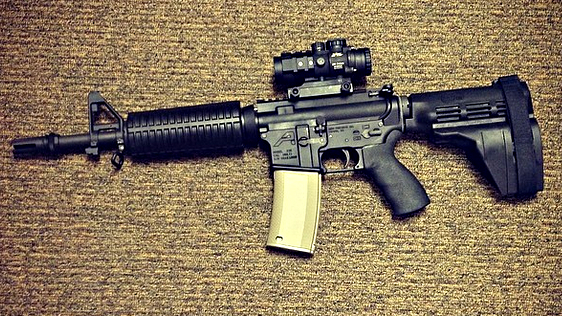 Here’s a quick look at what’s in the gun:

I’m going to be running Troy Battlemags in the gun, which have all been laser engraved with the Gun Nuts logo for the test. Ever wonder how tough a Battlemag is? We’re going to find out. However, the question of this post is about the optic we’re using. The Burris 3x is pretty awesome, it has a bullet drop comp and a bunch of other cool features in it. There’s a part of me that thinks it would be better off on a full size rifle like Shelley’s 3-Gun AR. Sitting in the office I also have three different red dot options: a Burris Fastfire III, several different RMRs, and of course the Redfield Counterstrike. I’ll admit there is something deeply giggle inducing about putting an optic called “Counterstrike” on this gun.

Pros for the red dots: infinite eye relief, parallax free, the ability to mount them further forward on the gun to accommodate a rear sight. Pro for the magnified optics (I also have a variable Leupold scope): It’s easier to hit stuff with a magnified optic. Honestly, it’s a toss up in my head. If I had to pick one based on my gut, I’d go with the magnified optic. But something feels a little silly about putting a 3x scope on a gun this small, because realistically, what kind of engagements am I planning for an AR pistol? I’m not shooting hadji at 400 yards with this gun, it’s just a range toy.

What do you guys think? Counterstrike or 332 for this gun? If I go with the C-Strike, the 332 will get put on the eventual ARX-100 headed this way.