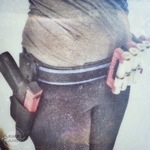 I’m sure I shared with you guys that at the end of last summer I met my ideal match; Lets call him “Big J”. He’s a dream boat and after many years of the single-life I feel incredibly lucky and blessed. One of our many shared interests is food. He loves to cook and we spend a lot of time in the kitchen together. Since he’s a meat and potatoes kind of guy we often have big meals that include a protein and a startch, a combination that had formerly been a rarity in my life.* After over 10 years of very a stable body weight, I began noticing some extra jiggles in certain places. I should point out that it’s not like I was working at it over those 10 years. My eating habits consisted of snacking when I found the time and that was about it. Also, I don’t weigh myself or stressing over dieting because I believe paying too much attention to such things is probably the cause weight gain and is generally no fun.

So when I went to my annual physical and got on that big doctors scale, I was shocked when the number was about 15lbs more than I was expecting. Then a bigger shocker, my doctor tells me to lose 10lbs! Luckily I was already planning to include a little extra running around in my 3gun training routine, so I didn’t let it get me down. Meanwhile, I have been acquiring 3gun gear and one of my first purchases was a competition belt. They don’t get measured like normal belts but it still seemed like a high number when I had to order a 40. When I received my belt, I put it on and immediately realized the sizing was dead-on. The belt was not the problem, it was the extra layer I had added to midsection over the winter.

So I’ve changed my eating habits and cut back on the amount I was consuming. My boyfriend and I are spending quality time on activities outside of the kitchen and we’ve downgrading the importance of meals in our daily activities. I have been using my 3gun training as an excuse to get the ol’ heart rate up and every day I concoct drills that have me sprinting to and fro.

And here’s how I know I’m doing something right: I just put on my competition belt in order to do some dry firing and I had to tighten it more than usual! It may just be that kind of a day, but I’m feeling motivated so I made a decision: I will be shooting the Atlanta 3Gun June club match! It will be my first real live shooting match as well as part of my preparation for the Brownells Lady 3 gun Pro-Am in October. I hope to see all my Atlanta friends there! And there’s a potential bonus: I have it on good authority that the Noveske 3gun Shooting Team will be in attendance too!

* I once read somewhere that when you eat protein and starches together the body can’t process both at the same time. It deals with the protein and stores the rest as sugar which is somehow equal to fat.